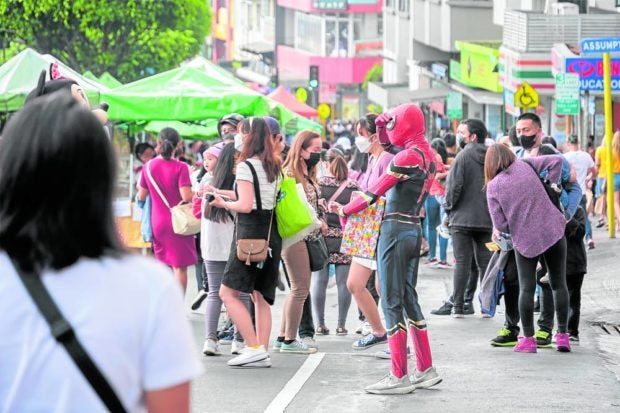 SUNDAYS ON SESSION | A street performer in costume mingles with the Sunday crowd on a carless Session Road in Baguio City. Tourists and residents pose for pictures with cosplayers in exchange for tips or donations. A proposed ordinance seeks to regulate street performances in the city. (Photo by NEIL CLARK ONGCHANGCO)

BAGUIO CITY, Benguet, Philippines — Cosplayers, street musicians, and dance groups have been delighting families and tourists who stroll around downtown Session Road here on Sundays when the city’s most popular and busiest road is closed to vehicular traffic.

Street performances in exchange for donations, or busking, became popular in the city because of the COVID-19 pandemic, according to social worker Liza Bulayungan, who heads the city social welfare and development office.

Buskers are in great demand on Sundays, the day Session Road becomes a pedestrian mall to accommodate small businesses struggling through the health crisis.

Their performances were tolerated and were even granted special permits as soon as restrictions on public movement were eased because it was an avenue for musicians, artists, and other people to raise money, Bulayungan told the Inquirer on Tuesday.

Like the rest of the tourism sector, most entertainers were hobbled by COVID-19 restrictions that shuttered restaurants, hotels, and performing venues. Some of the buskers who surfaced in 2021 were elderly musicians playing Elvis Presley tunes. A young violinist drew attention in September last year when she performed in the streets to raise money for an ailing relative.

Technically, busking is in a “legal gray area” since performing for tips or small donations is “still considered begging by some law enforcement agencies,” Bulayungan said.

But a proposed ordinance would soon regulate this popular street entertainment by making busking a semiprofessional enterprise in Baguio.

Filed by Councilor Leandro Yangot for first reading on Monday, the measure would require performers or performing groups to secure permits that would cost P350 and be valid for a year. There would also be designated entertainment spots where they would be allowed to receive money or gifts.

Describing busking as “a hugely overlooked art form,” Yangot’s proposed ordinance creates a busking administrator to be called the “street performance committee” to make sure the buskers follow rules and are not becoming nuisances to Session Road businesses.

As long as they do not obstruct pedestrians or handicap zones, buskers would not be considered “beggars” by the police and would be allowed to sell recordings of their work, the proposed measure states.

The committee, it said, is designed to protect the interests of buskers, who “bring live music to everyone no matter who they are and how much money they have in their pockets.”

For instance, the committee would make sure the street entertainers do not drown out each other’s performances by setting them apart by 50 meters.

Yangot said the proposed measure takes off from Baguio’s 2017 designation by the United Nations Educational, Scientific and Cultural Organization (Unesco) as the country’s first creative city. It joined the Unesco Creative Cities Network, which is composed of urban areas where creative industries like music or folk art contribute to economic growth.

Baguio was selected for its crafts and folk art, so “the vital role of our local artists must therefore be emphasized and their contribution to the Unesco [designation] must be appropriately rewarded,” the measure states.

For the past decades, the original buskers in city records have been blind guitarists and children dancing in Cordillera attire for coins.

But the composition of street entertainment has evolved, with the inclusion of mime artists, dancers and cosplayers. The most popular mime is a living statue referred to as “Green Man,” who has been performing as a green toy soldier even before the pandemic.