Antique under state of calamity due to dengue 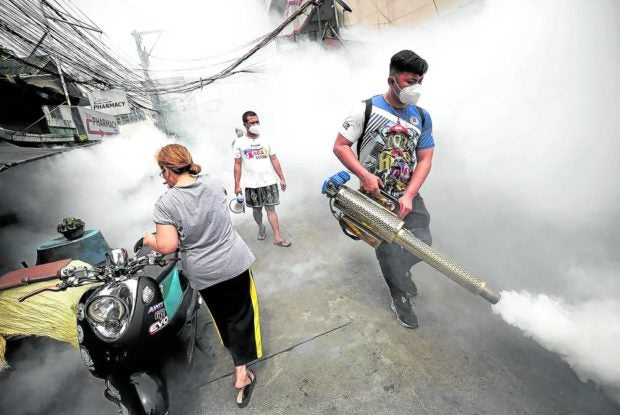 ANOTHER HEALTH PROBLEM | A worker from the city government of Manila conducts fogging against dengue-carrying mosquitoes in Tondo district in this July 5 photo. Other areas in the country, like Antique, are seeing an increase in dengue infections this year, prompting provincial and municipal governments to declare their localities under a state of calamity. (Photo by RICHARD A. REYES / Philippine Daily Inquirer)

ILOILO CITY, Iloilo, Philippines — The provincial board of Antique has placed the province under a state of calamity as the number of local dengue cases reached 1,581, with five deaths recorded, from January to July 9.

The figure was more than 500 percent higher compared to the 224 patients, including two deaths, over the same period last year, according to data from the Antique Provincial Integrated Disease Surveillance and Response Unit.

With the declaration, the provincial government last week under Gov. Rhodora Cadiao could tap its remaining Quick Response Fund (QRF) for dengue prevention and response.

Prior to the provincial declaration, the municipal councils of Anini-y, Hamtic and Sibalom declared their respective localities under a state of calamity due to rising number of dengue cases.

According to Memorandum Order No. 60 of the National Disaster Risk Reduction and Management Council (NDRRMC), when two or more municipalities or cities are affected by a disaster, the provincial board, upon recommendation of the provincial DRRMC, may declare the entire province under a state of calamity.

Antique officials said the QRF would be used for misting and targeted indoor and outdoor spraying, for procurement of larvicides, dengue test kits and for treatments, such as oral rehydration salts and intravenous fluids.

Dengue, a disease common in tropical and subtropical countries in the world, is transmitted through the bite of the Aedes aegypti mosquito, according to the World Health Organization.

The infection triggers a severe flu-like illness often followed by a severe drop in an infected person’s platelet count. Among other symptoms are severe headache, pain behind the eyes, full-body aches, nausea, vomiting, swollen glands or rashes.

The Western Visayas Center for Health Development of the Department of Health (DOH) and the Antique provincial health office recently launched the “Sabayang 4-5-6” program in the capital town of San Jose to respond to the increase in dengue infection in the region.

The program refers to the “4S” strategy to fight dengue — searching and destroying breeding places of mosquitoes, securing self-protection, seeking early consultation, and supporting indoor and outdoor spraying to prevent an outbreak.

These four strategies will be implemented by five teams in the Western Visayas or Region 6.