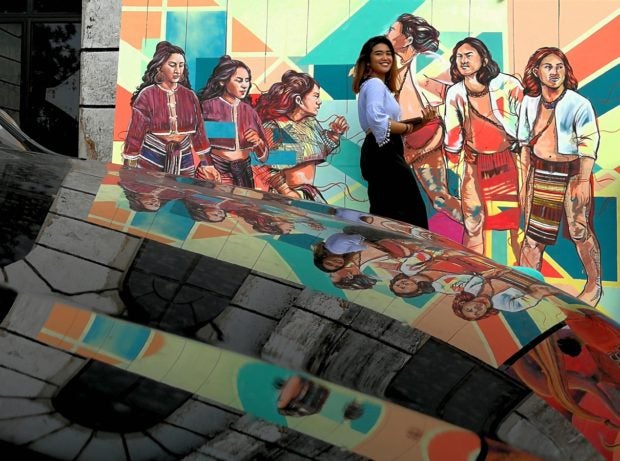 HIGHLAND MURAL Street mural artist Venazir Martinez displayed her works at the ruins of the former Diplomat Hotel during the Ibagiw Festival in November. —ALL PHOTOS BY EV ESPIRITU

BAGUIO CITY, Philippines — Since the 1950s, Baguio crafts have been oriented to meet the demands of souvenir hunters and repeat visitors. Rightly or wrongly, tourists today still associate Baguio souvenirs with the crass humor of the barrel man and wooden ash trays shaped like male genitals.

But should that continue to be the market of Baguio’s creative economy?

Artists, woodcarvers, silversmiths and indigenous weavers reflected on the past and future of their trade at the first Southeast Asian Folk Arts and Crafts Conference held in the city last month.

The conference was held after Baguio’s selection as the country’s first city to join the Creative Cities Network of the United Nations Educational, Scientific and Cultural Organization (Unesco). 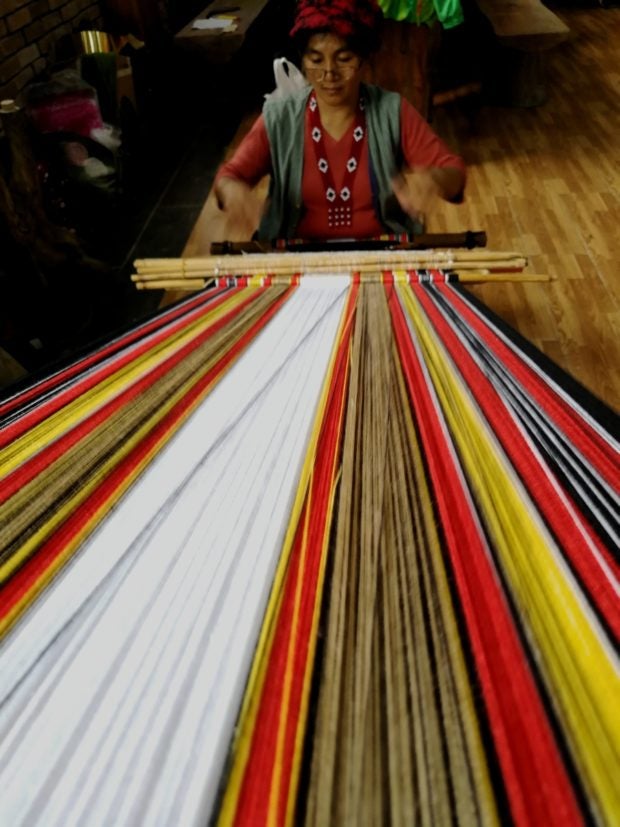 The network is composed of 66 cities around the world where art and creativity contribute to economic growth, placing their artists and artisans in the spotlight as key players in “sustainable urban development.”

Many of Baguio’s “creatives” have each employed up to 15 workers for short-term projects, proving that this sector generates livelihood, said Paolo Mercado, president of the Creative Economy Council of the Philippines (CECP), which helped facilitate the selection of Baguio as well as the second Unesco creative city, Cebu.

CECP interviewed 100 creatives who said they had at times hired 828 skilled workers, dispelling the stereotype “that artist and craftsmen are hermits who hide in a mountain to practice their art,” said Mercado, a marketing professional.

But many of the city’s creative workers feel underappreciated, not just by the government but by the market they serve, according to the CECP study, the first attempt to map Baguio’s creative industries or art enterprises which make a living out of paintings, jewelry, woven textiles or woodcarvings.

Most craftsmen and artisans complain about the “generally low value perception of Baguio creative products,” the study says. It stresses that the Baguio products are “highly dependent on the fickle tourist market.” 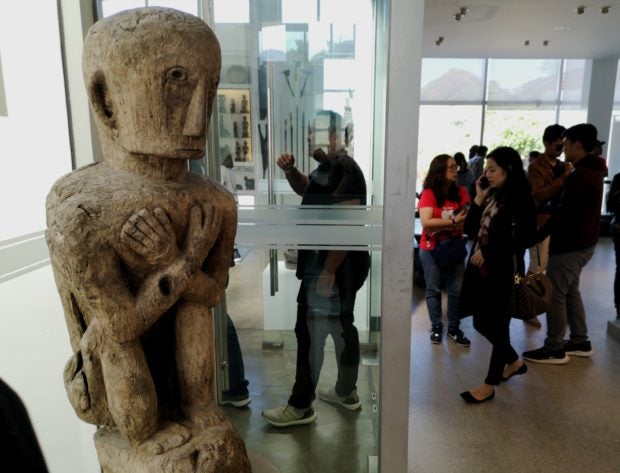 This is because current craft or functional art products have “no clear customer targets [or have pursued the] market development of art beyond their consumers dominated by tourists,” Mercado said.

He said these creative workers displayed and sold their products in areas dominated by “wagwagan” or “ukay ukay” (shops that sell imported secondhand goods).

“If your crafts and souvenirs and artworks, which take hours to make, are located in the same place where there are ukay ukay items and plastic toys, the mode of shoppers is to never accept the first quoted price so, of course, they will ask for a bargain,” he said.

The transaction is different for “products displayed [at a mall] where everyone knows you can’t haggle,” Mercado said.

“I am not saying crafts should be sold [at that mall],” he said, adding that developing an appropriate sales platform that showcases Baguio products would make shoppers realize the true value of their work.

Baguio crafts are still concentrated at the public market and shops at Maharlika Livelihood Center in the central business district. Many artisans still collaborate with traders who started the souvenir trade. 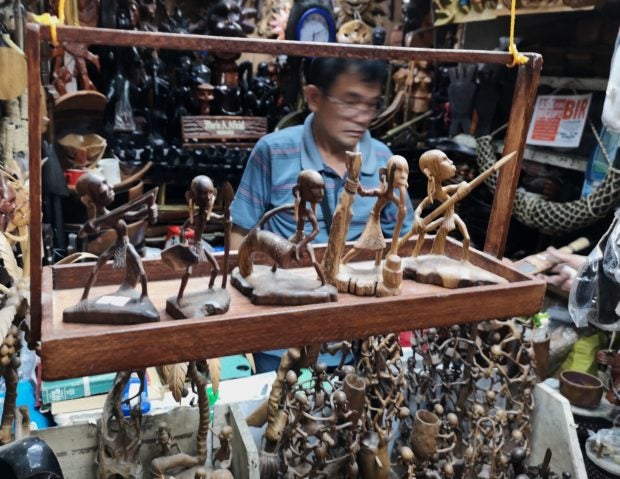 TRACES OF CORDILLERA Woodcarvings, whether the traditional “bul-ol”‍‍ (Ifugao rice granary guardians) displayed at BenCab Museum or the stick figure carvings that have become popular souvenirs, reflect the Cordillera influence of Baguio’s craftsmen and artists.

The first retailer made a little fortune selling handwoven “tapis” (indigenous skirts) in 1951, according to a historical profile of Baguio souvenirs that was presented by Karen de Castro and Lorraine Resurreccion.

Woodcarvings soon flourished, dominated by giant spoons and forks which fascinated both local and foreign tourists in the 1960s and 1970s.

The rise in souvenir trade matched the slow rise of Baguio tourism until the late 1970s. “Ube” jam and peanut brittle joined the souvenir boom, which peaked in the 1980s with high sales for handmade silver craft. By 1995, textile souvenirs suffered a drop in demand.

The wooden Barrel Man became popular during these decades although the item was briefly banned in the 1960s by that period’s mayor, Luis Lardizabal.

It is a miniature statue of a naked man that is encased in a wooden barrel. His “manhood” springs out when the barrel is lifted, which has made the item an ubiquitous commodity even today, said Adelaida Lim-Perez, chair of the newly formed Council for Baguio Creative City. But the item also shows why creating products for tourists can be “a double-edged sword,” said Perez, who is founder and president of the Habi (Philippine Textile Council) Foundation. 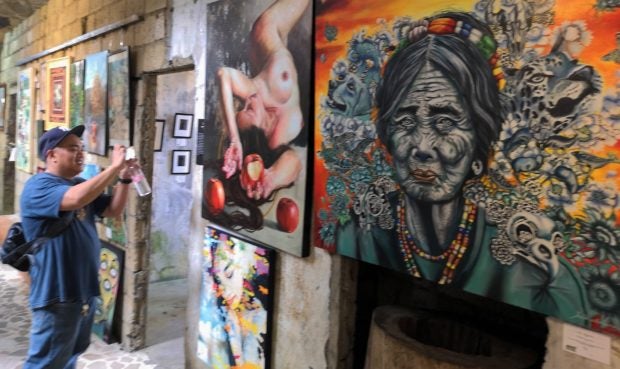 Tourism stimulates local economies, she said. But when artists accommodate a huge volume of visitors, they end up producing kitsch. Worse, copycats from outside Baguio may saturate the market and bring down the value of the genuine articles, Perez said.

But the trend in tourism has shifted from souvenir hunting to cultural immersion, which now gives “ample room for products with cultural values,” she said. Most Baguio craftsmen are registered entrepreneurs, according to 100 artists and artisans interviewed by CECP. But a good number and most of the city’s art community in the CECP survey continue to operate in the informal sector.

Mercado said stories shared by the artists indicated that many did not see the relevance of securing business permits, after expressing discontent at how government has neglected them. Some of the stories are about artists who contribute to Baguio projects and festivals only to be compensated with “packed lunches,”he said.

But the creatives are residents who are engaged in the city’s future and have been willing to tackle issues with local officials, Mercado said.

These artisans are getting old and have been unable to draw fresh talent from a “cell phone generation” that has been unwilling to learn craft skills “that require patience,” he said. 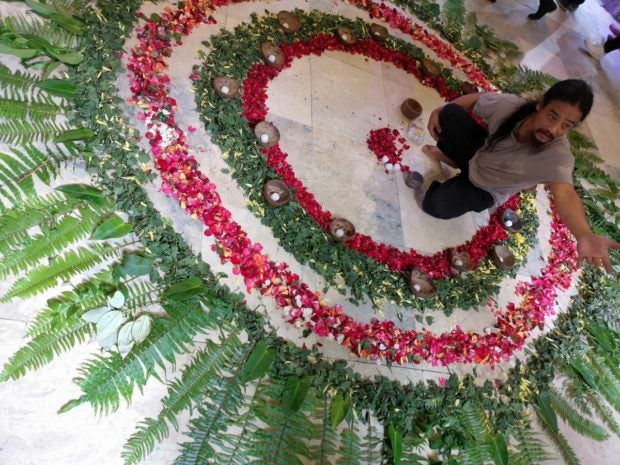 ART INSTALLATION Bumbo Villanueva’s art installation is a feast for the eyes and mind.

While many Unesco creative cities pursue high profile and more sophisticated arts and design programs, Baguio policymakers should direct their attention to the communities that spawned these talents, said Edric Ong, a Malaysian designer and architect.

Many artists in the CECP survey said their works were inspired by authentic Cordillera culture.