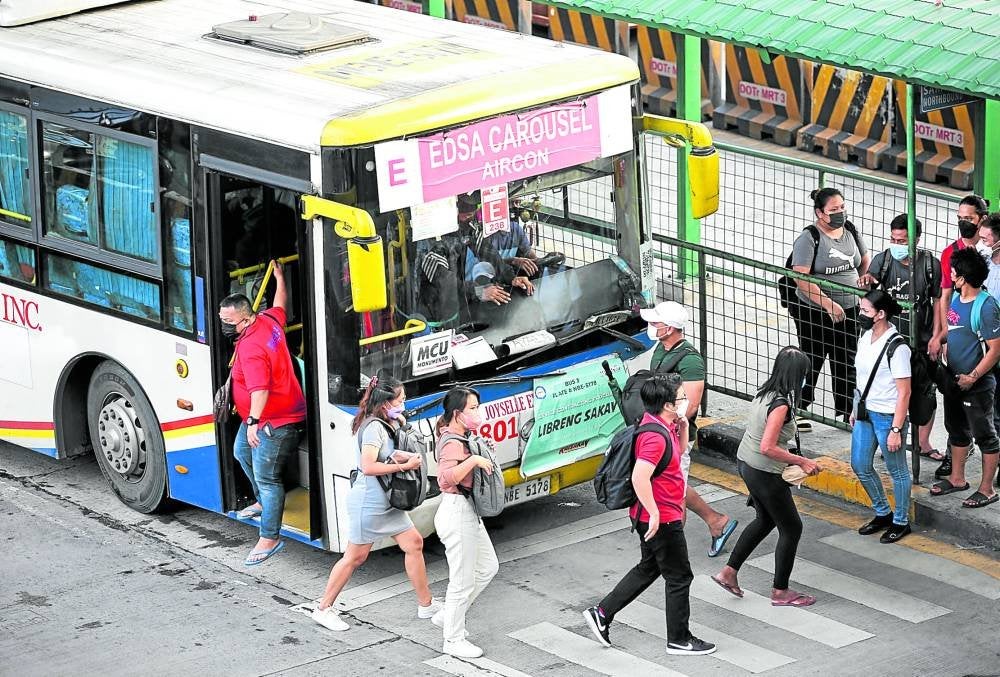 MANILA, Philippines—It’s between the operators and drivers.

This was how Tina Cassion, former executive director of the Land Transportation Franchising and Regulatory Board (LTFRB), described the payment issues confronted by bus drivers engaged in the government’s Libreng Sakay program.

As some drivers of public utility vehicles (PUVs) said they haven’t been paid yet, Cassion told ANC that drivers should file a formal complaint with the LTFRB, which will conduct an investigation.

“We have to know. You have to file a formal report,” she said, stressing that the problem is already between the employer and the employee—an issue which falls within the jurisdiction of the Department of Labor and Employment.

She said “we have already paid what we are obliged to pay” and that the LTFRB “can go after [operators] for breaching the contract if only they will file something before us […] how can we go after [them] if you do not even name who the operators are?”

Cassion stressed then that the LTFRB receives a liquidation report from operators—the employers—which states that employees have already been paid completely, so drivers should file grievances with the regulatory board if they haven’t received payment.

However, last Monday (July 18), lawyer Cheloy Garafil, the new LTFRB chairperson, said that on Week 13 of the program’s implementation, they discovered payment backlogs for bus drivers on Edsa Carousel. 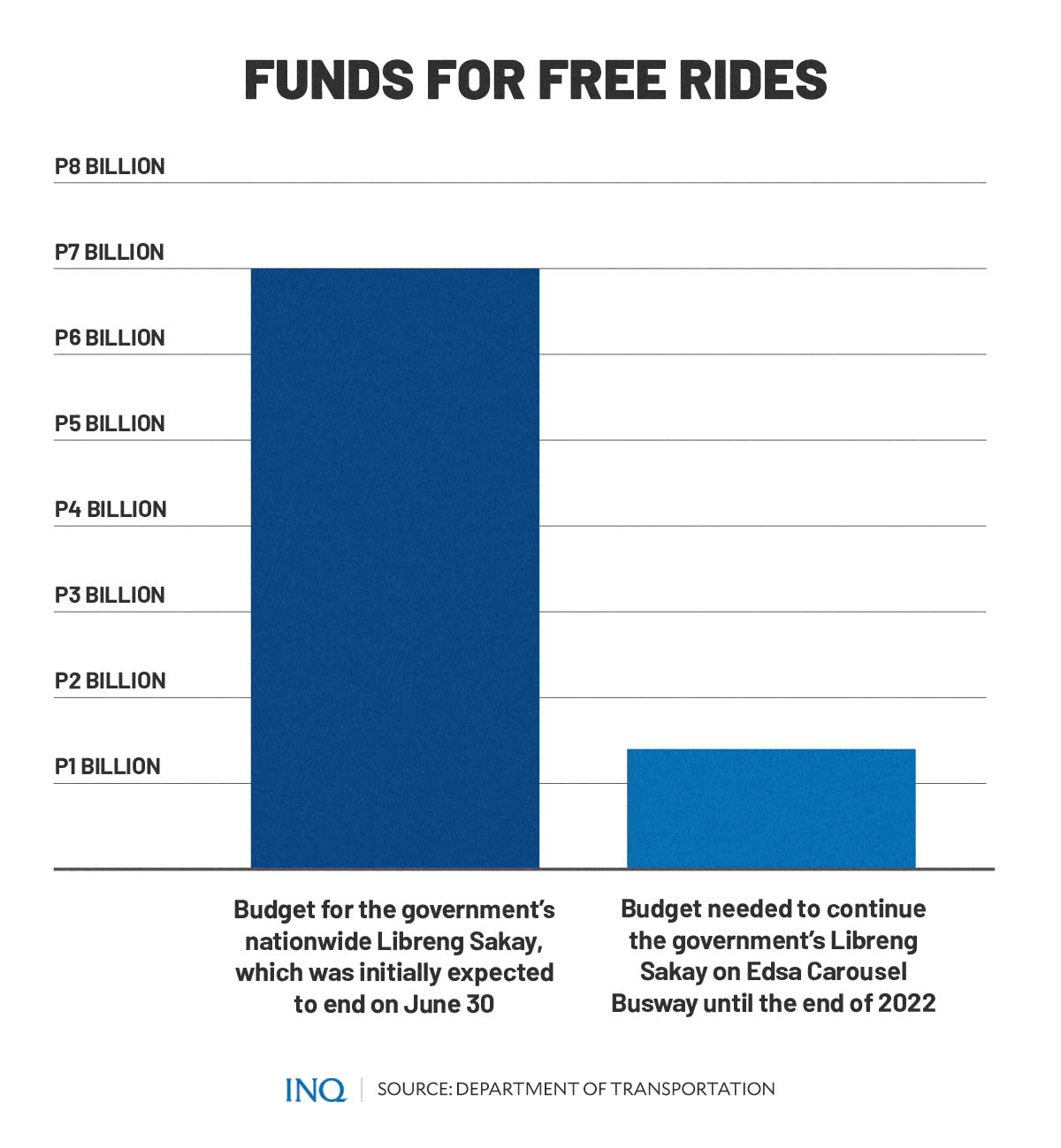 She said when she sat in the LTFRB two weeks ago, Week 6 of the program had not been paid yet. As a result, the LTFRB released P310 million, which covers Week 6 to 10, as payment to operators of the Libreng Sakay program.

“I immediately fast-tracked the payment so now, after two weeks, we are paying until week 10. We promised that we will further intensify their payment processing so that the bill will be updated by the end of July,” Garafil said.

Last March 23, the Department of Transportation said the Service Contracting Program, which would lead to the implementation of Libreng Sakay, will help people in their “mobility” needs by providing transport services that are efficient and reliable.

The Libreng Sakay on Edsa Carousel last April 11, the first day of the resumption of the program, saw a ridership of 307,396. The program, which was implemented all over the Philippines, was expected to have a ridership of 93,096,900.

However, bus drivers engaged in the government program said they are bleeding dry because of the delay in payments, stressing that they earn nothing and that they are already buried in debt.

Randy Naguit, a bus driver interviewed by GMA News, said “it’s hard, especially for us who have children, we are being buried in debt [just to make ends meet]. Once we receive [our salary], we pay the debt.”

Last month, bus drivers said: “Most of us have been in debt for a long time. We were only listened to after our protest, but until now, the process is still very slow and many of us were not yet given our hard-earned wages.”

This, as inflation hit a three-year high of 6.1 percent in June while fuel prices continued to rise. The value of P1 likewise shrank to P0.87 last month—the lowest to date. State statisticians said fewer goods can be bought now compared to every P1 four years ago.

READ: High inflation: Your P1 is now worth only 87 centavos

“Our question is what is the reason behind the delay in payment when in fact, the 2022 General Appropriations Act (GAA) provided P7 billion for the Libreng Sakay program,” she told One News.

The SCP was first implemented in 2020 to help operators and drivers hit by the COVID-19 lockdowns, especially by the 30 to 70 percent passenger limit that was set by the government.

Arthur Tugade, who was then transportation secretary, said the P7 billion, which is higher than the P3 billion in 2020, will pave the way for the resumption of the program by April. 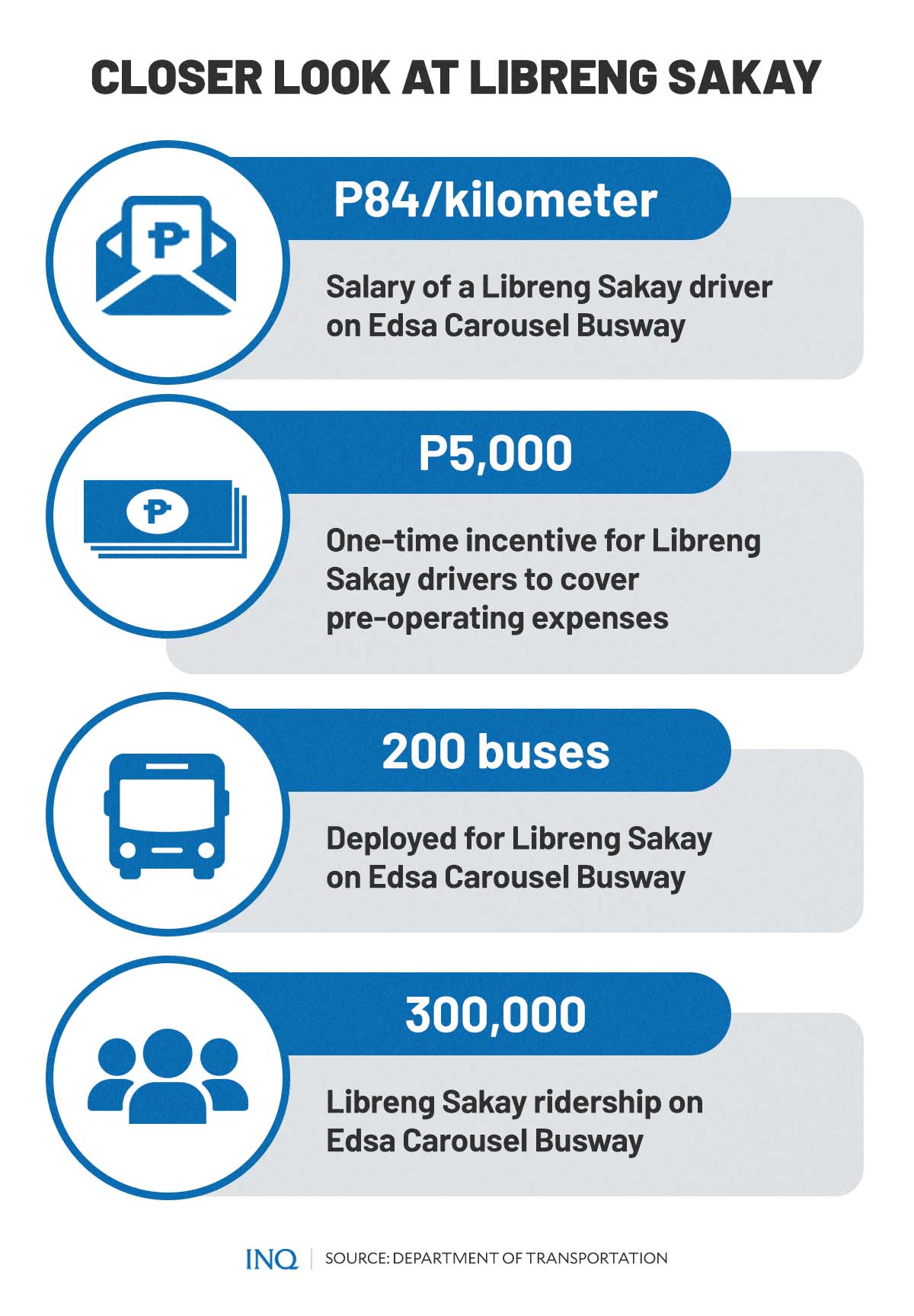 The implementation of the program came to a standstill on July 1, 2021 because of the expiration of the Bayanihan to Recover as One Act. It was continued on Sept. 13, 2021 through the 2021 GAA.

The DOTr said then that through the SCP, bus drivers on Edsa Carousel will get P84 for every kilometer, higher than the previous P82. The drivers were likewise expected to receive a one-time incentive to cover pre-operating expenses.

Based on data from the LTFRB, the busway only has more than 200 buses deployed on rush hours. Garafil said that there are 440 buses that are supposed to be on the Edsa Carousel.

The previous government initially said the Libreng Sakay on the busway would only last until July 31 while the program for jeepneys would end on June 30 because of the depletion of resources.

Transportation Secretary Jaime Bautista said on July 11 that the resources are no longer enough to extend the program on Edsa Carousel until December as the LTFRB already used 80 percent of the P7 billion.

“If we continue that until December, we’ll need an additional budget of P1.4 billion, which we don’t have in our existing budget,” Bautista said.

Last July 1, President Ferdinand Marcos Jr. approved the extension of the Libreng Sakay program on Edsa Carousel till the end of the year. He likewise gave his green light for free train rides for students once face-to-face classes resume in August.

Bautista and the LTFRB met with the consortium operating the Edsa Carousel, which promised that they will implement the maximum deployment of buses, especially on rush hours.

The transport secretary likewise said the department is looking into proposals to build a terminal in Monumento, Caloocan City to create a staging area and resting place for PUV drivers. 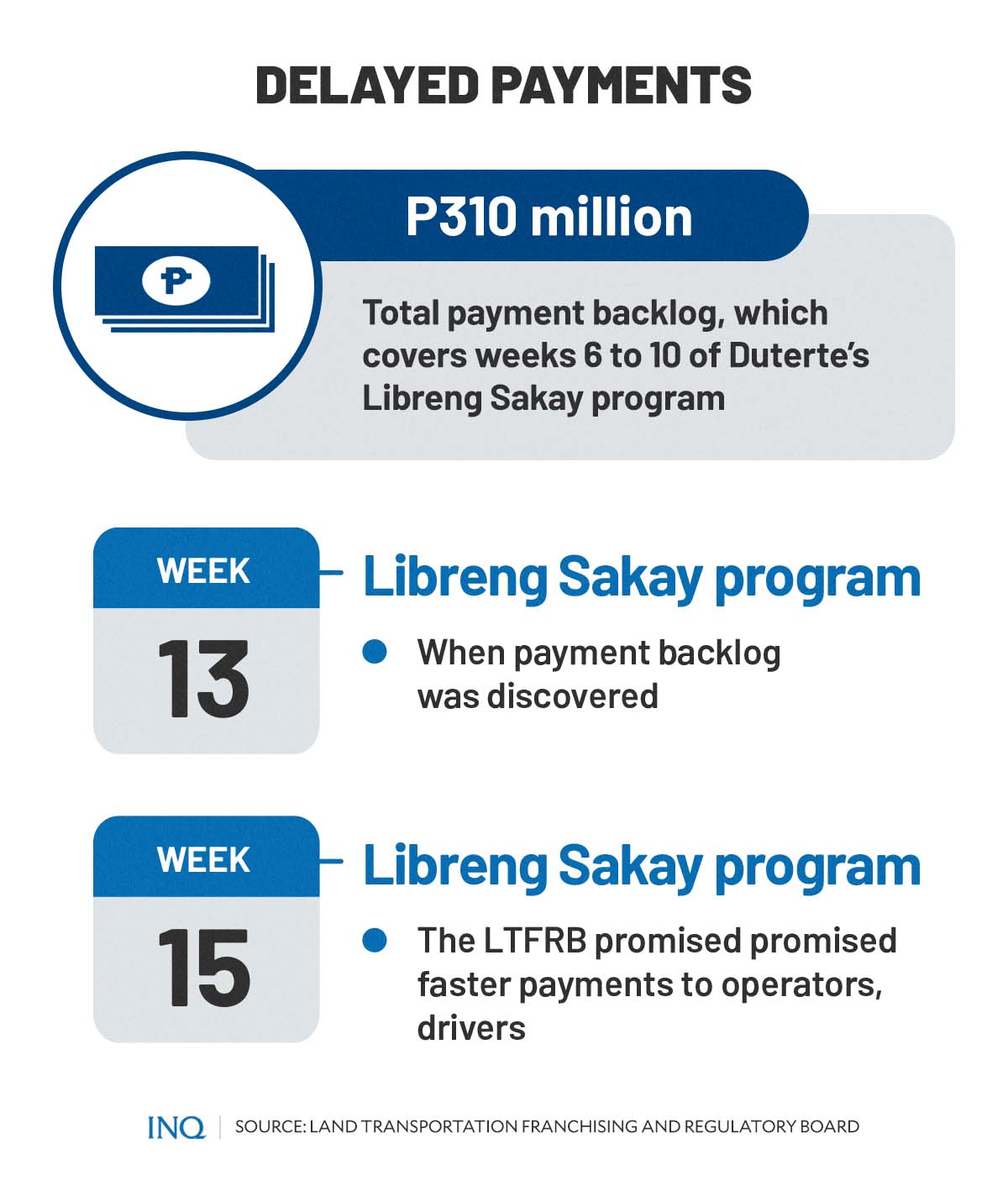 They discussed the placement of facilities at bus stops, too, to make passengers comfortable, especially when there is heavy rainfall. Rate adjustment, road accidents, and the limit on standing passengers were likewise discussed.

Last April, the Move As One Coalition said the government should reconsider the implementation of the SCP as Libreng Sakay, stressing that it will do “more harm than good.”

It said the program, if implemented as Libreng Sakay, will benefit only operators or drivers that are better off than those who depend on day-to-day operations for income—drivers severely hit by the rising fuel prices.

Likewise, it stressed that Libreng Sakay will sow social tension among operators or drivers plying the same route since passengers will obviously choose to ride PUVs that offer Libreng Sakay.

The coalition said the government should reconsider the implementation of the SCP as a gross service contracting program. Instead, the DOTr and LTFRB should optimize the resources by giving a percentage of the resources to a net SCP.

The net SCP “will be accessed by small cooperatives, especially by traditional PUJ operators or drivers.” It stressed that this will expand the reach of the program and will sustain public transport operations longer than Libreng Sakay.