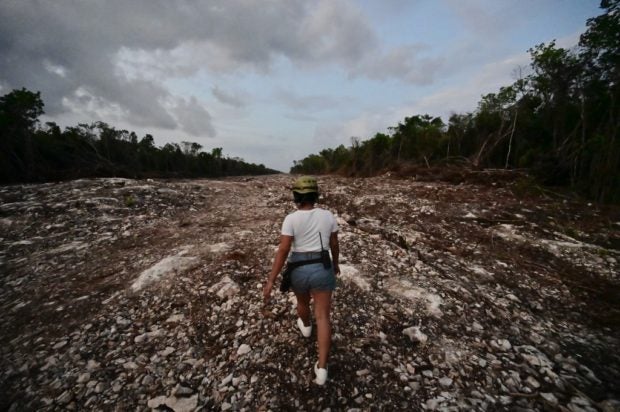 An activist walks through the construction site of Section 5 South of the Mayan Train between the resorts of Playa del Carmen and Tulum which was halted by a district judge pending resolution of an injunction sought by scuba divers and environmentalists — in the jungle in Playa del Carmen, Quintana Roo State, Mexico, on April 27, 2022. AFP

A judge indefinitely suspended construction of part of the Mayan Train in the Yucatan peninsula in late May.

The ruling followed a legal challenge brought by opponents, including scuba divers, who are concerned about the effect of the train on wildlife, caves and water-filled sinkholes known as cenotes.

But construction resumed on July 13 under a measure implemented in November that deemed the government’s major infrastructure works “national security.”

Under that ordinance, Lopez Obrador intends to shield the train and other projects from lawsuits that have delayed construction, as well as to expedite obtaining permits and licenses.

The Mayan Train “is a work of national security because of the railroads,” said Javier May, head of the National Fund for the Promotion of Tourism, the government agency overseeing the project, on Monday.

The public security and interior departments are determined to resume construction of the 60-kilometer (37-mile) section between the resorts of Playa del Carmen and Tulum, May said.

In the May ruling, the federal judge cited the “imminent danger” of causing “irreversible damage” to ecosystems, according to one of the plaintiffs, the non-governmental group Defending the Right to a Healthy Environment

Authorities were found to have failed to carry out the necessary environmental impact studies before starting construction of the section, one of several being built by the military, the NGO said in a statement.

The government appealed the decision.

On Monday, environmental organizations Greenpeace and Save Me from the Train separately warned that the Mexican government had resumed work without waiting for the appeals process to be completed, which in their opinion both violates the law and poses a major risk to the Riviera Maya ecosystems.

Lopez Obrador has insisted the railroad will not affect the cenotes and alleged that environmentalists have been infiltrated by “impostors.”