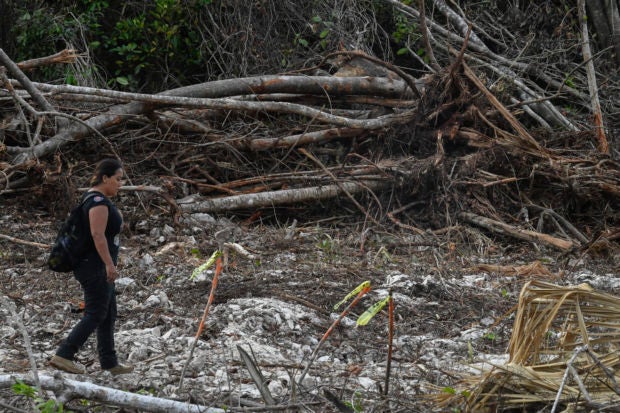 Activist and speleologist Tania Ramirez walks in the construction site of Section 5 South of the Mayan Train between the resorts of Playa del Carmen and Tulum which was halted by a district judge pending resolution of an injunction sought by scuba divers and environmentalists — in the jungle in Playa del Carmen, Quintana Roo State, Mexico, on April 27, 2022. AFP

PLAYA DEL CARMEN, Mexico—Bulldozers sit idle next to tree stumps along the disputed route of a new Mexican tourist train. Beneath the jungle, environmentalists warn that a magical labyrinth of underground rivers and caves is also under threat.

The rail link under construction between popular Caribbean beach resorts and archeological ruins is at the center of a legal battle between authorities and activists.

Opponents fear that a section between the resorts of Playa del Carmen and Tulum will cause irreparable damage to a subterranean network of caves, rivers and freshwater sinkholes known as cenotes connected to the Caribbean Sea.

Often filled with stunning emerald or turquoise waters illuminated by a shaft of light from above, cenotes are a major attraction for tourists visiting the Riviera Maya in the Yucatan Peninsula.

The sinkholes number in the thousands in the lush Mayan jungle and are connected to a giant aquifer that is a source of drinking water for local communities.

The most recently discovered cave holds archaeological remains, said Ramirez, who believes that Maya indigenous people once kept food there.

“You can find a cave at every step,” she said.

While authorities often insist the caves are not on the planned line but rather next to it, in reality everything is connected, Ramirez added.

Activists describe the area below ground as “gruyere cheese” because of all the holes.

“It’s a hollow area that wouldn’t support the weight of a train,” said Vicente Fito, a 48-year-old diver who ventures into the subterranean world almost daily.

The line “is going to go through places where everything is like that, with or without water, but hollow.”

The original plan for the disputed section was for an overpass over a highway, but the route was modified at the start of the year to go through jungle at ground level.

Lopez Obrador, who hopes to inaugurate the railroad at the end of 2023, said the reason was that the land is firmer in the jungle further inland with fewer cenotes and rivers.

The original route also upset the hotel industry due to the congestion caused by construction work in the urban area.

In April, a court in the southeastern state of Yucatan ordered the suspension of work on the disputed section — one of several being built by the military — pending resolution of an injunction sought by activists.

The judge cited a lack of environmental impact studies — grounds that the government plans to challenge in upcoming hearings.

He alleged that environmentalists had been infiltrated by “impostors” and that some non-governmental organizations were financed by hotel owners and the United States.

Lopez Obrador said that the government had reforested almost 500,000 hectares in the region.

Mexico’s president is betting that the $10 billion train project will help economic development in one of the country’s most impoverished regions.

Lenin Betancourt, president of the Riviera Maya Business Coordinating Council, sees the railroad as an opportunity to reduce poverty that has worsened in the resort cities of Cancun and Tulum despite the benefits of tourism.

“We need to create this type and scale of project,” he said, while also calling for the smallest possible environmental impact.

Otto Von Bertrab, a caver and activist, believes the only answer is to revert to the original route with a train over the highway carrying tourists and workers to hotels and towns along the way.

Otherwise, “this president’s legacy is going to be one of destruction,” he said.

Mexico tourists have whale of a time as pandemic eases

In heart of Mexico City, tourists embrace Day of the Dead celebrations