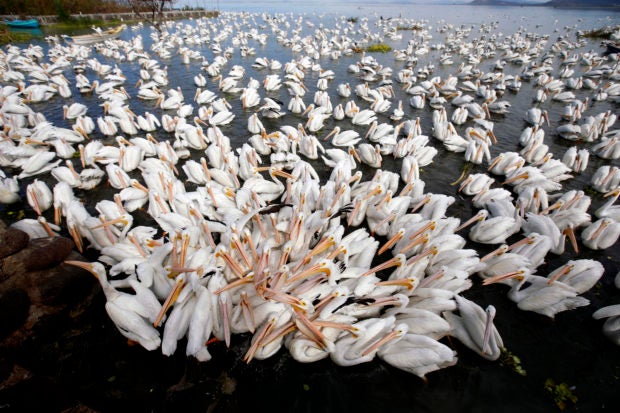 A pod of white pelicans, one of the largest birds in Canada and the US, are seen on the shore of the Chapala lagoon in Cojumatlan de Regules, Mexico, on January 28, 2022. AFP

PETATÁN, Mexico — A town in western Mexico where thousands of American white pelicans migrate is hoping to turn the birds into a global tourist draw — and recoup losses from the Covid-19 pandemic.

Petatan Island, located on Lake Chapala in Michoacan state, plays seasonal host to the birds, which head south in search of warmth and food.

Many locals note that the migration pattern is similar to the renowned monarch butterfly and takes place at the same time of year — between October and April — though they highlight the role they play in feeding these birds.

“Petatan is an island of fishermen, the fishermen go to the lagoon, collect the fish, extract the fillet and the bone… it is what serves as food when the pelicans are in season,” explains Ana Lilia Manso, mayor of Cojumatlan de Regules, the town that includes Petatan.

The community welcomes the American white pelicans’ arrival, which attracts tourists from nearby towns. They fill restaurants and pay for boat rides to get an up-close look at the flocks that adopt this region as their home for six months.

The birds, which can measure 1.75 meters (5.7 feet) long and up to three meters wide with outstretched wings, are characterized by the yellow color of their beaks and their white plumage.

Enrique Martinez, who filets the fish that are caught in the lake, estimates that daily they collect between one and two tonnes of backbones that end up becoming a delicacy for the pelicans, even though the winter months have the lowest volume of fishing.

He stresses that the island’s population takes care of the birds and cares that they have food.

“It doesn’t bother us at all, we like having them here,” says Martinez, 41. But the town wants “people to come see them, so that there is more publicity.”

Last year, Covid-19 forced the closure of the island of Petatan due to the high number of infections and deaths, while this year a regional festival scheduled for February was postponed due to the rebound in cases from the Omicron variant.

Yet Mayor Manso trusts that once the virus cases are under control, the event can be held again.

Mexico tourists have whale of a time as pandemic eases