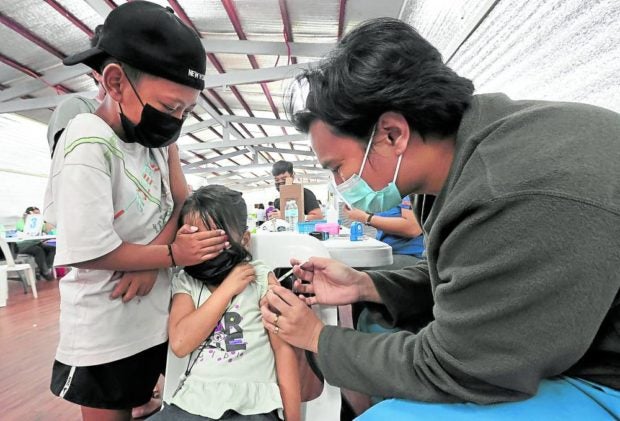 BIG BROTHER | A boy stays by his younger sister’s side as the latter receives her COVID-19 vaccine shot at Marikina Sports Center in Marikina City on Monday, July 18, 2022. The city government is continuing its vaccination drive to cover children between 5 and 11 years old, especially with the resumption of in-person classes starting in August. (Photo by GRIG C. MONTEGRANDE / Philippine Daily Inquirer)

According to the DOH, 35 of the 14,640 confirmed new COVID-19 cases last week were severe or critical, while the vast majority were mild, asymptomatic, or moderate. There were 10,271 reported cases the previous week.

The DOH added that no COVID-19 death has occurred in the past two weeks or from July 4 to 17.

On Sunday, the country recorded 2,560 new infections of COVID-19, the fourth consecutive day that the DOH has logged more than 2,000 daily infections.

The DOH COVID-19 tracker showed that Metro Manila remained the region with the most number of infections in the last two weeks with 9,713 cases. It was followed by Calabarzon (Cavite, Laguna, Batangas, Rizal and Quezon) with 5,420, and Western Visayas with 2,261.

Quezon City topped the list of areas with the most reported cases of COVID-19 over the last two weeks with 1,886, followed by the province of Cavite with 1,827 and Manila with 1,316.

Health-care utilization slightly increased but remained at a low-risk level, or below 50 percent, according to the latest DOH data.

The DOH reported that 589 patients, or 8.7 percent of total COVID-19 admissions, were severely or critically ill.

The DOH reported 19,873 active cases or people who are still infected with the virus.

However, 49,747,468 fully vaccinated individuals who are eligible for their booster shot have not availed themselves of the additional protection against the more infectious variants of the virus.

According to the NVOC, out of 65.34 million individuals due for their first booster shot, only 15,592,533 have received the booster dose.

On Sunday, it reported that five provinces had registered “very high” or more than 20 percent COVID-19 positivity rates.

Based on the World Health Organization’s standard, the positivity rate should be 5 percent or less.

“In provinces where the positivity rate is very high, i.e. above 20 percent, the public is strongly advised to practice necessary caution to prevent COVID infection,” he said on Twitter.

Meanwhile, Metro Manila, which has the most number of new COVID-19 infections, posted a 12.6 positivity rate. This was up from 10.9 percent recorded in the capital region on July 9.

Nationally, the country’s positivity rate was at 9.5 percent, according to the DOH.

Despite the rising COVID-19 infections, Health Undersecretary Maria Rosario Vergeire, also the DOH officer in charge, had noted that all areas in the country were still at “low risk” as severe and critical infections, as well as the average daily attack rate, remained low.