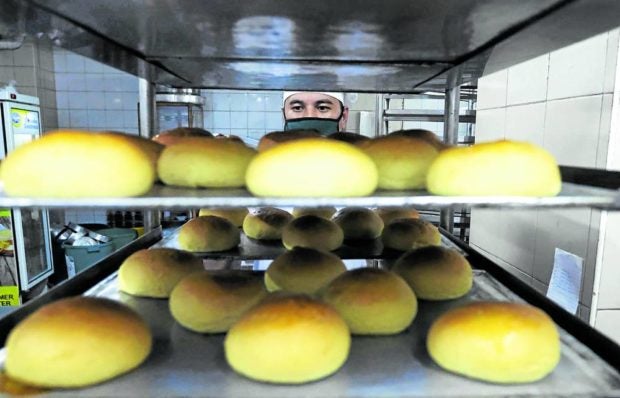 OVEN FRESH | Freshly baked pieces of bread are prepared in this bakery in Dapitan, Manila, in this photo taken in June. Community bakers say they are reducing the sizes of their products, including the Pinoy breakfast staple “pandesal,” so they can cope with the rising costs of flour, eggs and fuel. (Photo by MARIANNE BERMUDEZ / Philippine Daily Inquirer)

MANILA, Philippines — Filipinos are starting to see the breakfast staple “pandesal” shrink after prices of key ingredients like wheat, eggs, and flour have risen high enough to threaten the viability of the smaller mom-and-pop bakers.

Lucito Chavez, president of Asosasyon ng Panaderong Pilipino (APP), told the Inquirer on Monday that community bakers had to resort to shrinking their serving sizes to keep their operations afloat given the rising input costs, which also include expensive fuel.

Aside from this, he said small-scale bakeries were finding it financially challenging to shoulder additional operating expenses such as disinfection and other health-related protocols because of the COVID-19 pandemic.

The industry has been experiencing a “long drought season” with sales dwindling due to less foot traffic in the past years, Chavez said, noting that the return of in-person classes could bring more customers. Still, he said this might not be enough to help the bakers recover since ingredients were now too expensive.

“For the last two and half years almost, walang estudyante (there were no students). It is a long drought season. What do you think is the outlook of the industry, particularly the small ones?” he lamented.

Johnlu Koa, president of the Philippine Baking Industry Group (Philbaking), suggested that the mom-and-pop stores raise prices for the quality of their baked goods to remain the same.

But Chavez said it was not easy to do so as customers of community bakeries expect the goods, particularly pandesal, to be cheap.

As such, the APP leader said that, as a compromise, customers should not expect that servings would still have the same size as before given that bakeries were also trying to survive the pandemic.

Pandesal is being sold for around P2.50 to P5 apiece, depending on the size, in community bakeries, Chavez said.

For the bigger bakers, or those manufacturing Pinoy Tasty and Pinoy Pandesal brands, making and selling these at smaller sizes was not an option, Koa said, noting they have to follow government regulations and standards set by the supermarket owners.

“They (supermarkets) don’t want to sell undersized packaging,” Koa said. “We have a brand to protect. We cannot disappoint our market.”

Koa said they were absorbing the added costs of the more expensive ingredients to retain the quality of the baked bread.

“We have reserves. We have bank lines. We have financing options,” Koa said, unlike community bakeries whose working capital could be limited.

In the meantime, Koa said they have not asked the Department of Trade and Industry (DTI) to increase the suggested retail prices (SRP) for Pinoy Tasty and Pinoy Pandesal given that the new administration just came in and was still in the adjustment period.

Albay Rep. Joey Salceda warned on Sunday night of a “shrinkflation,” or reduced serving sizes, in bread triggered by price increases in key ingredients in baking.

Expecting shrinkflation in bread, the lawmaker also asked flour millers and bread makers to fortify their products with additional vitamins and minerals.

According to Salceda, bread would probably be the hardest hit by shrinkflation as wheat prices have increased by 165 percent.

“At that point, bread makers will probably both increase prices and shrink sizes,” he said.

As early as March, the lawmaker warned of higher bread prices with the continuing Russia-Ukraine conflict’s effect on the global wheat trade. Russia is the world’s biggest exporter of wheat and the two warring countries supply a quarter of global demand for the commodity.

“Egg prices are also threatening to go out of control. Sugar supply is already problematic,” he noted.

Salceda said that Fortunato de la Peña, secretary of the Department of Science and Technology during the administration of former President Rodrigo Duterte, had also asked millers and bread makers to “consider other alternatives and additives to maintain nutritional value without increasing prices or reducing sizes significantly.”

The Albay lawmaker vowed to work with FNRI to craft a “prescribed guide for bread makers to come up with bread at similar nutritional value but lower cost.”