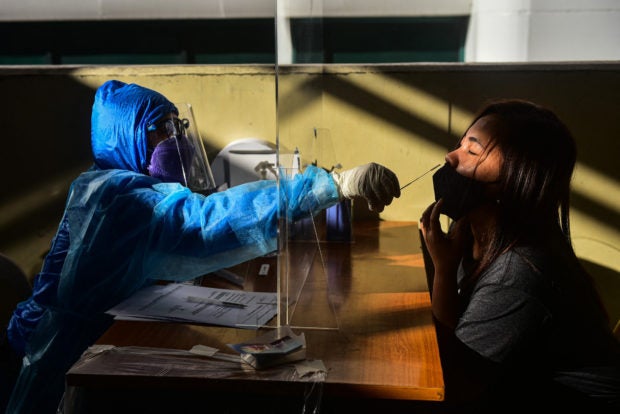 A health worker collects a swab sample from a passenger to test for the COVID-19 coronavirus, at a train station in Quezon City, suburban Manila on January 18, 2022. (Photo by Maria Tan / AFP)

It was based on the recently-released data by the Department of Health (DOH), which showed 2,285 new infections were reported on Monday, bringing active cases to 20,524.

The positivity rate is slightly higher than the national rate declared by the DOH on Thursday, which was at 10.6 percent and is double the WHO’s positivity rate benchmark of 5 percent.

David also noted that in Metro Manila, Quezon City reported the most infections with 232, followed by Makati with 123 and Manila with 89.

Octa also reported that Metro Manila’s COVID-19 positivity rate had already reached 12.6 percent, while nine other areas have also exceeded 10 percent (ranging from 14 to 27 percent) for their respective positivity rates.

The DOH had also previously warned that daily COVID-19 infections nationwide could reach as high as 17,105 by the end of July, with Metro Manila reaching up to 11,186 average daily cases during the same period.