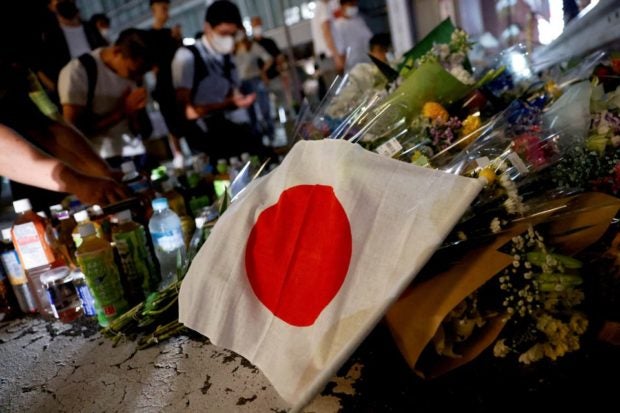 A Japanese flag is seen as people pray next to tributes laid at the site where late former Japanese Prime Minister Shinzo Abe was shot while campaigning for a parliamentary election, near Yamato-Saidaiji station in Nara, western Japan, July 8, 2022. REUTERS

TOKYO — The man suspected of killing former Japanese premier Shinzo Abe with a hand-made gun on Friday could have made the weapon in a day or two after obtaining readily available materials such as wood and metal pipes, analysts say.

The attack showed gun violence cannot be totally eliminated even in a country where tough gun laws mean it is nearly unheard of for citizens to buy or own firearms.

There have been some cases in recent years where people illicitly made weapons themselves in Japan. But still, gun crime is very rare in Japan: last year there were 10 shooting incidents, eight involving gangsters, according to police data. One person was killed and four wounded.

“The making of guns with a 3D printer and the manufacturing of bombs can nowadays be learned off the internet from anywhere in the world,” said Mitsuru Fukuda, a Nihon University professor specialized in crisis management and terrorism.

“It can be done in two to three days after obtaining parts such as pipes,” said Fukuda, who analyzed images of the gun used in Abe’s shooting.

Video images showed the assailant fired at Abe with a device that had a pistol grip and what appeared to be two pipes covered in black electrical tape. Police arrested a 41-year-old man at the scene and said he had admitted shooting Abe; the suspect was later identified as Tetsuya Yamagami.

“Anyone with a basic understanding of how guns work could have made it with minimum knowledge,” said firearms commentator Tetsuya Tsuda, adding that it may not even have taken half a day to manufacture the weapon used in the attack.

Japanese media said on Saturday the suspect had told investigators he had searched online for instructions how to make firearms, and ordered parts and gunpowder on the internet as well.

The gun measured 40 by 20 centimeters (15.7 by 7.9 inches), and was made of materials such as metal and wood, officials from the Nara prefectoral police told reporters on Friday.

Police did not rule out the possibility that the bullets were also made by hand but said they were still investigating.

Investigators seized what appeared to be five hand-made guns from Yamagami’s house, the Mainichi newspaper reported on Saturday.

“Crude, yet lethal, craft-produced (…) firearms such as this are simple to make,” said N. R. Jenzen-Jones, an arms and munitions intelligence specialist of the Australia-based Armament Research Services.

The images of the firearm showed that an electrical wire passed through the cap on the end of each pipe.

That pointed to the use of an electric firing mechanism, Jenzen-Jones said.

“The electrical initiation method (…) was likely selected in this case as conventional cartridges are much harder to acquire in Japan than in many other regions,” he added.

There have been several cases in recent years of people arrested in Japan for illegally making firearms.

In 2018, police arrested a 23-year-old man in the western city of Himeji for making a gun and more than 130 bullets at home. Also that year, police detained a 19-year-old university student in Nagoya city for manufacturing explosives as well as a gun with help of a 3D printer.

In 2014, police arrested a 27-year-old man for illegally possessing handguns made by a 3D printer in Kawasaki, south of Tokyo.

The issue of illicit weapons making is not confined to Japan. For example, officials in Spain found a replica assault rifle and small arms in a raid of an illegal factory discovered to be producing 3D-printing weapons in April 2021.

The suspect in Abe’s shooting told investigators he had manufactured guns with three, five and six metal pipes in addition to the one he used in the attack, media said.

Arms specialist Jenzen-Jones said the weapon used in the incident was at the lower end of the capability spectrum.

“Nonetheless, it was clearly lethal,” he added.