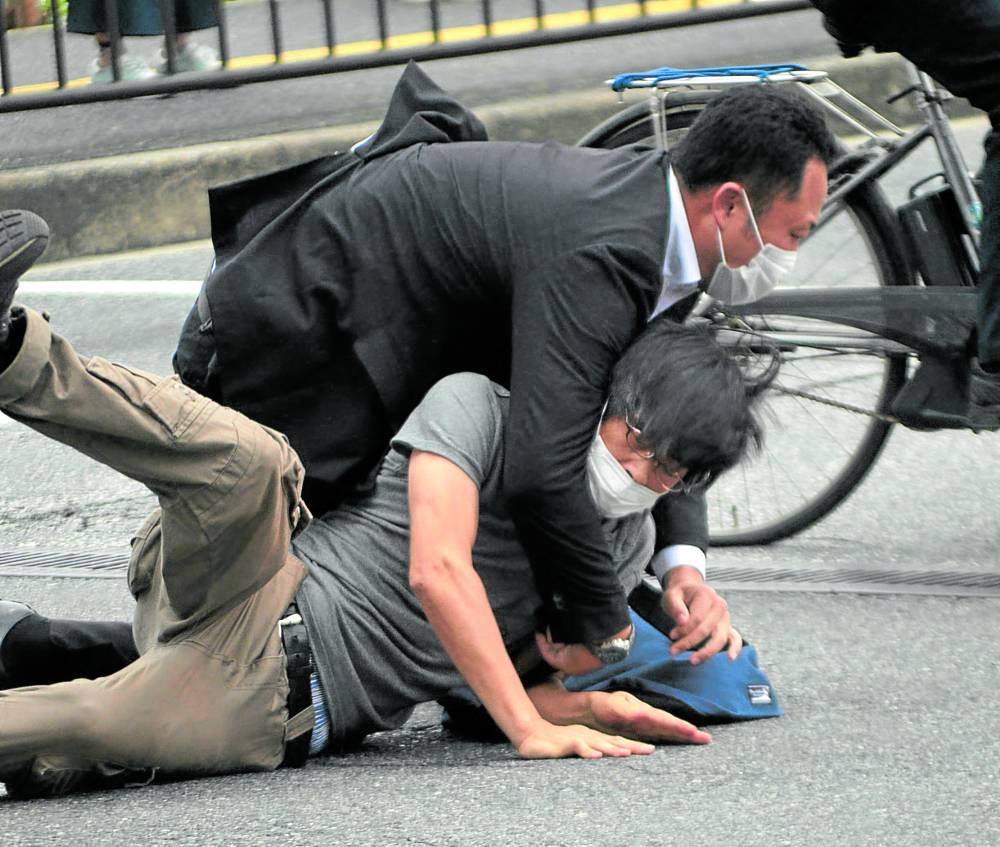 TOPSHOT – A man (bottom) suspected of shooting former Japanese prime minister Shinzo Abe is tackled to the ground by police at Yamato Saidaiji Station in the city of Nara on July 8, 2022. (Photo by Yomiuri Shimbun / AFP)

TOKYO — The man accused of assassinating Japan’s former prime minister Shinzo Abe has been arrested and named by police as Tetsuya Yamagami.

Police say the unemployed 41-year-old admits shooting Abe with a homemade gun at a campaign event on Friday, but what else do we know about the suspect so far?

Yamagami told police he had served in Japan’s navy, the Maritime Self-Defense Force, for three years from 2002.

More recently, he worked at a factory in western Japan for around a year and a half, but quit in May this year, local media reports said.

“His attitude towards work had not been a problem. I’m surprised and shocked,” his former manager at the plant told the Mainichi Shimbun newspaper.

Yamagami spoke to police after the attack in a “matter-of-fact” way, according to officers.

Former middle school classmates interviewed by public broadcaster NHK said the suspect had been quiet but not a loner, and was good at both sports and academics.

What could the motive be?

“The suspect stated that he held a grudge against a particular organization, and that he committed the crime because he believed former prime minister Abe had a connection to it,” police said Friday.

They did not give the name of the organization in question, but Japanese media said it was a religious group, citing unnamed investigative sources.

NHK and the Mainichi Shimbun said Yamagami’s family had suffered troubles as a result of his mother’s financial donations to the organization.

Yamagami had originally planned to target the head of the group but then switched focus to Abe, who he believed had promoted the organization in Japan, Kyodo News reported, also citing anonymous investigative sources.

How was the crime carried out?

Yamagami said he had used a handmade gun to carry out the attack, and images from the scene showed a crude, boxy weapon with two barrels, covered in heavy-duty black tape.

He is suspected of making at least one of the weapons several months ago, Jiji news agency said. Jiji also reported that Yamagami had taken part in live-fire shooting exercises in the Navy.

The officers said Yamagami had found out about Abe’s visit to Nara online.

He is believed to have taken a train to the station where the former prime minister was giving a stump speech.

In dramatic footage from the shooting, Yamagami is wearing brown cargo pants and a plain grey shirt.

His mouth and nose are hidden by a white surgical mask, and he is wearing narrow-framed glasses under a long fringe.

He was carrying a shoulder bag from which he apparently drew the weapon before dropping it on the ground when apprehended.

Read Next
Sri Lanka leader flees as protesters storm home, office
EDITORS' PICK
House energy committee chair Arroyo bats for cheap electricity
How not to retire as an ex-president
Lawmakers eyeing more changes in Maharlika plan
The vivo Y02 is now available in the Philippines for only PHP 5,299
Shop smarter with vivo’s big 12.12 holiday deals
Hidilyn Diaz wins only gold missing from her collection
MOST READ
Don't miss out on the latest news and information.