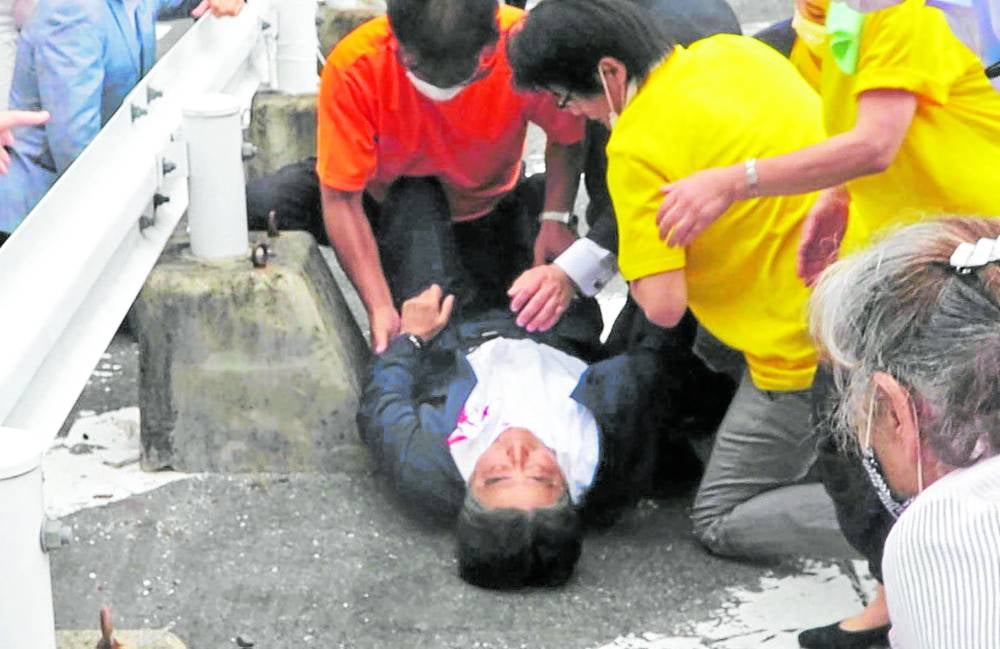 MURDER AT NOON While delivering a campaign speech before a roadside gathering in Japan’s Nara prefecture on Friday, Shinzo Abe was shot twice from behind and was initially reported to be responsive as supporters come to his aid and a bodyguard tackles the suspected assassin. The 67-year-old former prime minister was later pronounced dead at a hospital. —PHOTO BY REUTERS

KASHIHARA—Japan’s former Prime Minister Shinzo Abe died in hospital on Friday, hours after being shot at a political campaign event in an attack condemned as “absolutely unforgivable.”

The assassination of the country’s best-known politician comes despite Japan’s strict gun laws and with campaigning under way, ahead of upper house elections on Sunday.

Citing a senior member of the ruling Liberal Democratic Party (LDP), national broadcaster NHK said Abe died at a hospital in this city in the prefecture of Nara.

Abe was brought here for emergency treatment after he was attacked in the prefecture’s capital, also named Nara, where he was delivering a stump speech late Friday morning. He was 67.

Earlier, Prime Minister Fumio Kishida abandoned the campaign trail and flew to Tokyo by helicopter where he addressed reporters a few hours before Abe’s death.

Struggling to keep his emotions in check, Kishida said: “This attack is an act of brutality that happened during the elections—the very foundation of our democracy—and is absolutely unforgivable.”

“This is a very, very sad moment,” US Secretary of State Antony Blinken told reporters at a G20 meeting in Bali, saying the United States was “deeply saddened and deeply concerned.”

The Philippines’ Department of Foreign Affairs (DFA) issued a statement on Friday night saying “Mr. Abe was greatly admired by many Filipinos. We thank him for his key role in the strengthening of Philippines-Japan relations, and for establishing a very deep bond of friendship with our country.”

“We send our most heartfelt sympathy to Madame Akie Abe and their family. We pray for their comfort in this most difficult time,” the DFA added.

Abe was a popular international figure in the country who had an immediate rapport with its leaders. Visiting in January 2017, the then Prime Minister had a morning snack at President Rodrigo Duterte’s home in Davao City. Duterte also gave Abe a brief tour of his hometown.

Leyte Rep. Martin Romualdez called Abe a “dear friend of the Filipino people” and a “great leader and statesman.”

“The world has lost a kind and decent man, a great leader and a statesman. I join the country of Japan and the Filipino nation in mourning the death of the beloved leader,” he said in a statement.

In a statement late on Friday night, Duterte’s spokesperson Martin Andanar quoted the former President as saying: “Abe was a good and loyal friend, a staunch supporter of my administration and a strong ally of the nation. As the world mourns the loss of this great man, we remember him for his compassionate service and remarkable leadership.”

Senior politicians like Abe are usually accompanied by security but often get close to the public, especially during political campaigns when they make roadside speeches.

Footage broadcast by NHK showed him standing at a road island when a man dressed in a grey shirt and brown trousers began approaching from behind, then drew something from a bag and fired two shots, each producing a cloud of smoke.

As onlookers and members of the media ducked, the man was shown being tackled to the ground by security. He was later arrested on suspicion of attempted murder, reports said.

Several news outlets described him as a former member of the Maritime Self-Defense Force, the country’s navy. Defense Minister Kishi declined to comment on that information.

Yamagami was wielding a weapon described by reporters on the scene as a “handmade gun.” NHK said he told police after his arrest that he was dissatisfied with Abe and had “targeted Abe with the intention of killing him.”

Witnesses at the scene described shock as the gathering turned into chaos.

“The first shot sounded like a toy bazooka,” a woman said. “He didn’t fall and there was a large bang. The second shot was more visible, you could see the spark and smoke.”

“After the second shot, people surrounded him and gave him cardiac massage,” she added.

“There was a loud bang and then smoke,” businessman Makoto Ichikawa, who was also at the scene, said, adding that the gun was the size of a television camera.

Abe was bleeding from the neck, as shown by photographs released later that day. He was reportedly initially responsive but subsequently lost consciousness.

Nara emergency services said he had been wounded on the right side of his neck and left clavicle.

His brother, Defense Minister Nobuo Kishi, had said Abe was getting blood transfusions.

Abe’s wife, Akie, was on her way by train to the hospital.

A fire department official in Nara said Abe appeared to be in a state of cardiac arrest by the time he was airlifted.

Japan’s longest-serving prime minister, Abe held office in 2006 for one year and again from 2012 to 2020, when he was forced to step down due to the debilitating bowel condition ulcerative colitis.

But he had remained a dominant presence over the ruling LDP, controlling one of its major factions.

He was a hawkish conservative who pushed for the revision of Japan’s pacifist Constitution to recognize the country’s military.

Kishida, Abe’s protege, had been hoping to use the election to emerge from Abe’s shadow and define his premiership, analysts have said.

The prime minister said “no decision” had been made on the election, though several parties announced their senior members would halt campaigning in the wake of the attack.

Japan has some of the world’s toughest gun-control laws, and annual deaths from firearms in this country of 125 million people are regularly in single figures.

Getting a gun license is a long and complicated process for Japanese citizens, who must first get a recommendation from a shooting association and then undergo strict police checks.

Airo Hino, political science professor at Waseda University, said the shooting was unprecedented in Japan. “There has never been anything like this,” he said.

But in 2007, the mayor of Nagasaki was shot and killed by a Yakuza gangster. A few other prominent postwar politicians were attacked but not injured.

Japan has seen “nothing like this for well over 50 to 60 years,” said Corey Wallace, an assistant professor at Kanagawa University who focuses on Japanese politics.

He said the last similar incident was likely the 1960 assassination of Inejiro Asanuma, the leader of the Japan Socialist Party, who was stabbed with a samurai short sword by a right-wing youth.

“But two days before an election, of a [man] who is so prominent … it’s really profoundly sad and shocking.”

He noted too that Japanese politicians and voters are used to a personal and close-up style of campaigning.