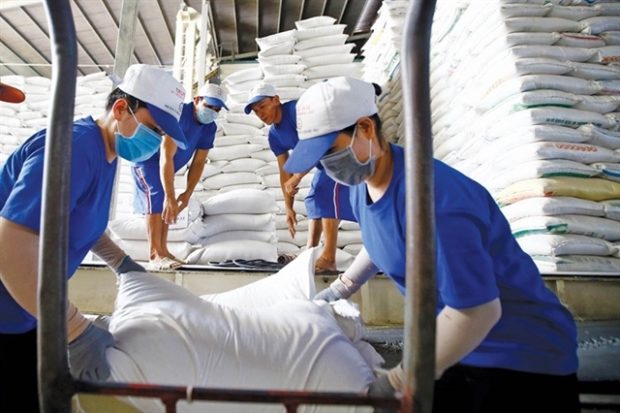 HANOI — The disruption of global wheat supply caused by the Russian military operations in Ukraine has left importers no choice but to seek substitution for the grains in rice-exporting countries, boding well for Vietnamese rice.

Vietnamese rice has been increasing steadily in price in recent months, surpassing Thai rice and leaving many other countries’ rice far behind.

In the first five months, rice exports hit 2.77 million tons, up 6.6 per cent year-on-year, raking in $1.35 billion. Of which, the volume of rice exported to leading trade partners rose considerably.

Specifically, the figures to Africa went up by 76 percent, to Philippines by 34.6 percent and to Malaysia by 19 percent.

The rising demand for Vietnamese rice can be observed not only in traditional markets, but also in high-end markets, including Germany, Sweden and Poland.

By early June, the Department of Crop Production has granted 149 certificates to eight rice exporters, allowing over 15,100 tons of rice to enter the European market.

“Room for Vietnamese rice exports is still ample as global food security has been threatened by the military operations,” said Nguyễn Đăng Nghĩa, an agricultural expert.

However, some other experts think that it is too early to celebrate the optimistic outlook as many importers have begun to look elsewhere for cheaper rice amid the rising price of Vietnamese varieties.

Numerous African firms are considering switching to Indian rice for lower prices and lower transport costs despite its inferior quality to Vietnamese rice.

“Indian rice has considerable advantages over Vietnamese rice in terms of price since the latter has moved from the low-end to high-end segment,” said Phạm Thái Bình, general director of the Trung An High-tech Farming JSC.

Bình also said that mounting fertiliser prices had been eroding rice producers’ profits to the extent that many suffered losses when they exported via CIF mode of transport.

That meant these producers could not keep prices low to retain foreign customers. Market switching, as a result, seems on the horizon.

Given the situation, Phạm Văn Có, marketing manager at the VRICED LTD, underscored Vietnamese fragrant rice as a highly competitive rice variety in the international market.

He urged rice producers to raise the bar on fragrant rice to gain ground in high-end markets. He also recommended firms invest more in their trademarks to create room for prices to rise.

A rice variety with a well-known trademark could be sold at a price 10-20 per cent higher than an identical one with an unknown trademark.

He said the ministry would introduce more favourable policies to help firms promote their trademarks and establish robust supply chains of Vietnamese rice.

“We aim for a modern and sustainable rice industry that produces high-quality rice varieties meeting SRP, VietGAP, GlobalGAP and many other quality standards,” he added.