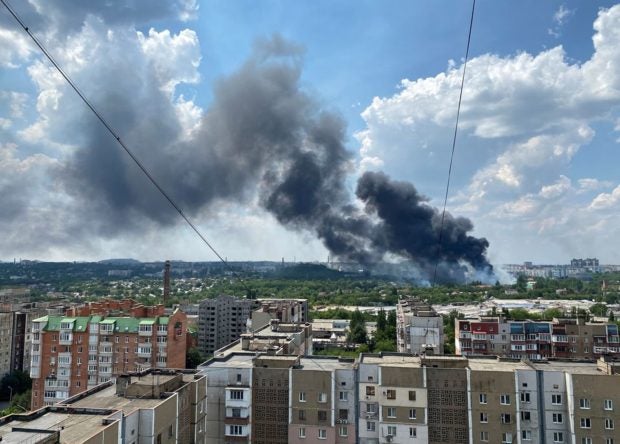 Smoke rises from the territory of an automotive centre following recent shelling during Ukraine-Russia conflict in Donetsk, Ukraine July 5, 2022. REUTERS

KYIV/KRAMATORSK, Ukraine — Ukraine has so far staved off any major Russian advance into the north of its Donetsk region, but pressure is intensifying with heavy shelling on the city of Sloviansk and nearby populated areas, the Ukrainian military said on Wednesday.

Russia and separatist proxies were already in control of the southern part of Donetsk province when they effectively completed the seizure of the neighbouring Luhansk region on Sunday with the capture of the city of Lysychansk, much of which now lies in ruins.

Moscow says ejecting the Ukrainian military out of both regions is central to what it calls its “special military operation” to ensure its own security, a more than four-month-long offensive that the West calls an unprovoked war.

Donetsk and Luhansk provinces comprise the Donbas, the eastern, heavily industrial region of Ukraine that has become Europe’s biggest battlefield for generations and over which Russia wants to wrest control for separatists it supports.

In its evening note on Wednesday, Ukraine’s military suggested that Russian forces were intensifying pressure on Ukrainian defenders along the northern flanks of Donetsk province.

It said Russian forces were bombarding several Ukrainian towns with heavy weaponry to enable ground forces to advance southward into the region and close in on Sloviansk.

“The enemy is trying to improve its tactical position…(They) advanced … before being repulsed by our soldiers and retreating with losses,” the Ukrainian military update said. 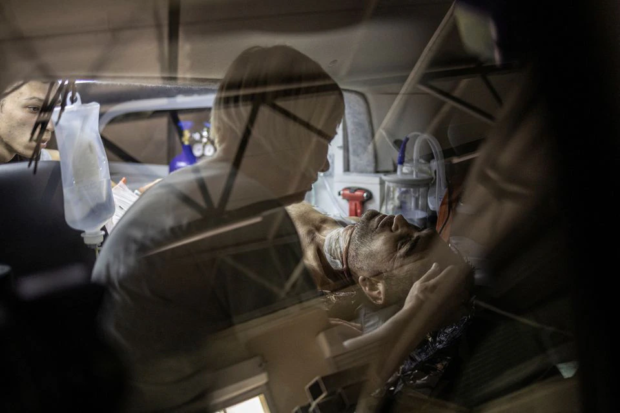 Sergii Veselyi, 51, speaks to his wife Svetlana, as he lies in an emergency vehicle after he was injured during shelling in Sloviansk, as Russia’s attack on Ukraine continues, in Kramatorsk, Donetsk region, Ukraine, July 5, 2022. REUTERS

Other Russian forces, it said, aimed to seize two towns en route to the city of Kramatorsk, south of Sloviansk, and were also trying to take control of the main highway linking Luhansk and Donetsk provinces.

“We are holding back the enemy on the (Luhansk/Donetsk) border,” Luhansk Governor Serhiy Gaidai told Ukrainian TV. Later, he said Luhansk was still not entirely occupied by Russian forces and that Russia had sustained “colossal losses.”

“They will continue to try to advance on Sloviansk and Bakhmut. There is no doubt about that,” he said.

Sloviansk Mayor Vadym Lyakh told a video briefing the city had been shelled for the last two weeks.

“The situation is tense,” he said, adding that 17 residents had been killed there since President Vladimir Putin ordered Russian forces into Ukraine on Feb. 24.

Russia’s defence ministry says it does not target civilians and on Wednesday said it was using high-precision weapons to take out military threats.

It said it had destroyed two advanced U.S.-made HIMARS rocket systems and their ammunition depots in Donetsk province. Ukraine denied this and said it was using HIMARS to inflict “devastating blows” on Russian forces.

“At last, Western artillery has started to work powerfully, the weapons we are getting from our partners. And their accuracy is exactly what is needed,” he said.

Ukraine has repeatedly pleaded with the West to send more weapons to repel the invasion that has killed thousands, displaced millions, and flattened cities.

Ukrainian Foreign Minister Dmytro Kuleba said he had spoken Wednesday with his German and U.S. counterparts, where he said the importance of continuing military aid was discussed. 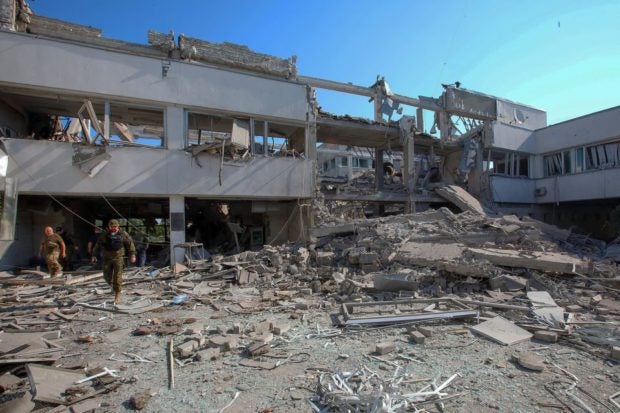 In the Donetsk city of Kramatorsk, which Russian forces are expected to try to capture in coming weeks, Ukrainian soldiers and a handful of civilians ran errands in green-painted cars and vans on Wednesday. Much of the population has left.

He was unlikely to follow official advice to evacuate, he said, despite an increase in missile strikes. “I’m not looking for death but if I encounter it it’s better to be at home,” he said.

“Russia is trying to demoralise Kharkiv but it won’t get anywhere,” he said. Ukrainian defenders pushed Russian armoured forces well back from Kharkiv early in the war, and Terekhov said around 1 million residents remained there.

South of Kharkiv, the governor of Dnipropetrovsk said that region had been battered by missiles and shelling, while on the southern coast the port of Mykolaiv was also being heavily shelled, Oleksandr Senkevych, its mayor, told a briefing. The city has already shed about half of its pre-war population of half a million.

“There are no safe areas in Mykolaiv,” he said. “I am telling the people… that they need to leave.”

Russia says it was forced to try to demilitarize Ukraine after the West ignored its pleas to guarantee that its fellow former Soviet republic and neighbor would not be admitted to Nato. Moscow says it also had to root out what it said were dangerous nationalists and protect Russian speakers.

Ukraine and its Western backers say Russia’s stated aims are a pretext for an unprovoked, imperial-style land grab.

In a sign that Moscow is not preparing to wind down its operation anytime soon, Russia’s parliament on Wednesday rushed through bills requiring businesses to supply goods to the armed forces and obliging employees at some firms to work overtime.