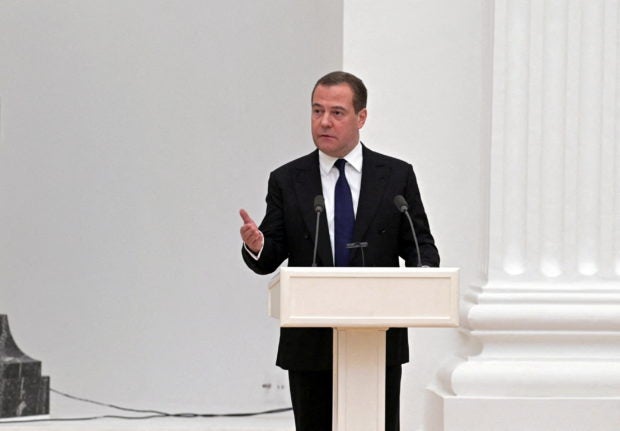 Deputy Chairman of Russia’s Security Council Dmitry Medvedev delivers a speech during a meeting with members of the Security Council in Moscow, Russia February 21, 2022. Sputnik/Alexey Nikolsky/Kremlin via REUTERS

“The idea to punish a country that has the largest nuclear arsenal is absurd in and of itself,” Medvedev, a close ally of President Vladimir Putin, said on messaging app Telegram.

“And potentially creates a threat to the existence of mankind.”

Medvedev, who was Putin’s stand-in president between 2008 and 2012, is now deputy head of the Security Council.

He accused the United States of wanting to put Moscow in front of international tribunals, while itself never facing punishment for its own wars which, according to him, caused 20 million deaths worldwide.

“The whole of American history, starting from the suppresion of the Indians, is bloody wars of annihilation,” said 56-year-old Medvedev, referring to native Americans.

Since Putin sent troops into Ukraine on February 24, Medvedev has regularly taken to social media to lash out at the West and those critical of Moscow.

Last month, he called those who “hate” Russia, “degenerates” and vowed to work to “make them disappear.”