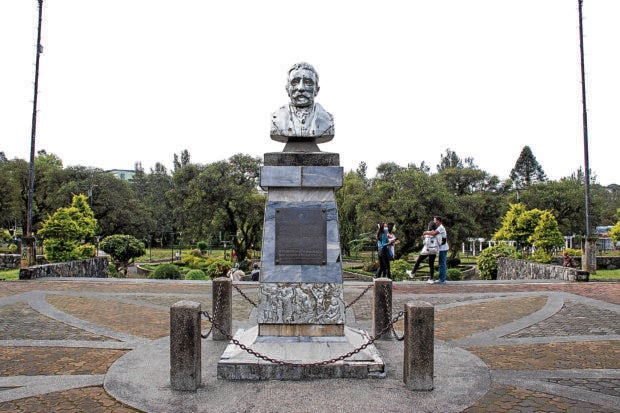 TOP ATTRACTION | A bust honoring American architect Daniel Burnham for his role in the development of Baguio City is seen at Burnham Park, the summer capital’s top tourist attraction named after him. —NEIL CLARK ONGCHANGCO

BAGUIO CITY, Benguet, Philippines — The creation of the country’s summer capital at the start of the 20th century has been one of the expressions of the United States’ “enduring friendship,” officials said during this year’s Filipino-American Friendship Day on Monday.

This city, which was chartered and opened in 1909, “began as an American idea and is pursued as an American dream,” said Mayor Benjamin Magalong at the program held at Camp John Hay’s Bell Amphitheater.

Baguio was designed and built as a hill station by the American colonial government. Key districts and roads today are named after its American founding fathers, such as Burnham Park, which honors Chicago architect Daniel Burnham, who conceived the city’s design.

Magalong said the city also owes its basic infrastructure to American colonial officials “who created [our] pathways to progress,” like the city’s last American mayor, Eusebius Halsema (1920-1937), an engineer, who put up Baguio’s public service systems like its roads and drainage system.

“What better place to commemorate [Fil-Am Friendship Day] than here in Baguio given our joint development of the city as well as our common cultural ties and experiences here going back more than 120 years,” said James Fellows, deputy consul general of the US Embassy, who attended the ceremony.

Fellows referred to the July 4, 1946, Treaty of Manila, which “commended the unity of American and Philippine ideals and [had] heralded a new era of the two governments and peoples who are [bound] as closely as ever by ties of friendship and mutual trust.”

He said this bond was “truly unbreakable,” pointing out that the United States remains the country’s top export destination.

About 4 million Filipinos, Fellows said, are in the United States as migrants or as overseas workers, while over 300,000 Americans have become Philippine residents.

After the COVID-19 pandemic broke out in March 2020, the US government donated 73 million vaccine doses to the country, “while 33 million doses were donated directly by the American people,” the embassy official said.

In 2017, the embassy donated $129,000 (P7 million) to the Baguio Museum to finance the preservation of “heritage objects associated with the people of the Cordillera,” he said.

Camp John Hay, which hosted the ceremony, was established in 1903 and became an American rest and recreation center.

It was where the Pacific leg of World War II began in 1941, when the camp was bombed by the Japanese, and ended in 1945, when Japanese Imperial Army General Tomoyuki Yamashita signed the surrender paper.

It was the US Supreme Court that issued the Native Doctrine in 1909, when it recognized the native rights of Ibaloy chieftain Mateo Cariño over what has become Camp John Hay.