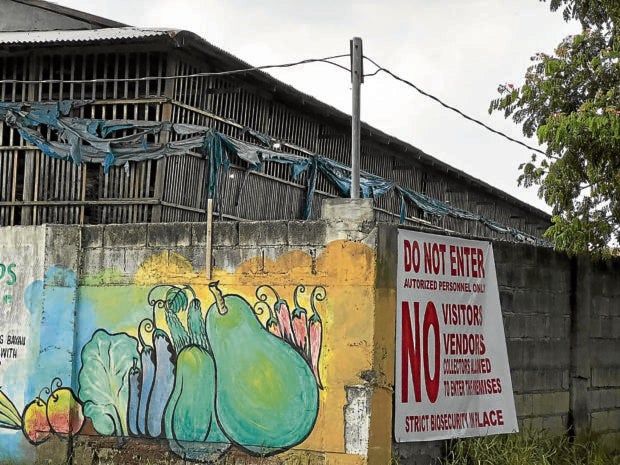 SAFEGUARD | A suspected contaminated farm in Sto. Tomas town, Pampanga province, gets a sign warning against entry and other precautions after health authorities detected cases of bird flu in the area. (CONTRIBUTED PHOTO)

CITY OF SAN FERNANDO—Workers in five farms in Sto. Tomas town, Pampanga province, on Monday rushed the culling of more than 100,000 egg-producing chickens after laboratory tests by the Department of Agriculture (DA) confirmed the highly pathogenic avian influenza (HPAI), or bird flu, on several samples in the area.

In a telephone interview, Mayor John Sambo said he ordered the culling following the advice of Crispulo Bautista, the DA director in Central Luzon, to carry out quarantine prevention and control measures against a possible outbreak of bird flu in the province.

Bautista, in a letter to Sambo on June 30, said the samples taken in Barangay San Bartolome from June 24 to June 27 were positive for influenza Type A subtype H5N1.

According to the US Centers for Disease Control and Prevention, H5N1 is deadly to animals and can infect humans on rare occasions.

About 250,000 more chicken layers were due for culling on Tuesday, the mayor said, adding that checkpoints would also be set up as part of quarantine measures.

The Pampanga provincial government was able to contain the spread of the virus during those outbreaks but at least P198 million in losses were incurred by the province’s poultry industry in 2017.

In February this year, several quail farms at the villages of Dalayap and Mangga in Candaba town, and San Antonio in Mexico town, both in Pampanga, were found to be infected with the H5N1 strain.

At that time, the DA and the provincial government “acted swiftly” and carried out all the necessary protocols to immediately contain the virus, agriculture and local officials said.