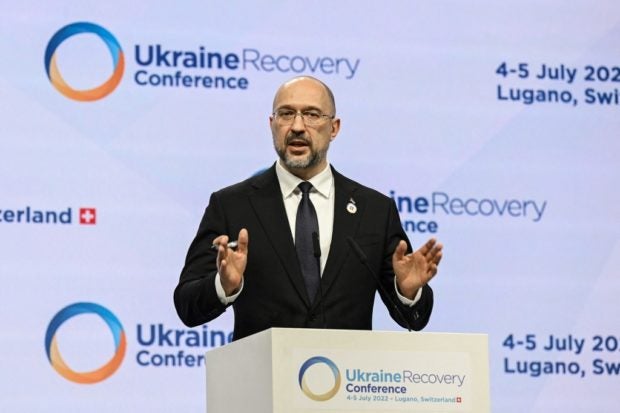 Ukraine’s Prime Minister Denys Shmyhal gives a press conference at the end of a two-day International conference on reconstruction of Ukraine, in Lugano on July 5, 2022. AFP

Russia says it is investigating the torture of Russian soldiers held prisoner in Ukraine that were recently released as part of a prisoner swap.

The Russian Investigative Committee, which probes major crimes, says one of the 144 Russian soldiers exchanged last week related being treated by doctors without an anaesthetic and being “beaten” and “tortured with electricity” in captivity.

The soldier allegedly said he was left without food and water for days.

Nato launches the process to ratify Sweden and Finland as the newest members of the 30-member defence alliance.

“This is a good day for Finland and Sweden and a good day for Nato,” the alliance’s chief Jens Stoltenberg tells reporters in a joint statement with the Swedish and Finnish foreign ministers.

“With 32 nations around the table, we will be even stronger and our people will be even safer as we face the biggest security crisis in decades,” he says.

Russian cosmonauts onboard the International Space Station congratulate Russian forces on capturing the eastern Ukrainian region of Lugansk by being photographed with the flag of the area’s pro-Russian rebels.

“We celebrate on earth and in space,” Roscosmos said.

Ukraine’s Maryna Viazovska becomes only the second woman to be awarded the prestigious Fields medal, dubbed the Nobel prize for mathematics,

Viazovska, a 37-year-old Kyiv-born math professor, shared the prize with three other winners.

She accepted the award at a ceremony in Helsinki, which was chosen to replace Saint Petersburg as the venue for the congress after Russia invaded Ukraine in late February.

The head of Russian mining company Nornickel, Vladimir Potanin, says he is ready to discuss a merger with aluminium group Rusal to create a metals giant capable of resisting the effects of Western sanctions.

Potanin told Russian business paper RBK that he made the proposal to Rusal on Monday.

Potanin had always opposed a merger of the world leader in nickel and palladium with Rusal, which already owns 25.25 percent of Nornickel.

But both companies are affected by Western sanctions targeting Russia over its military campaign in Ukraine. Potanin also cited the challenges they face to make their companies greener.