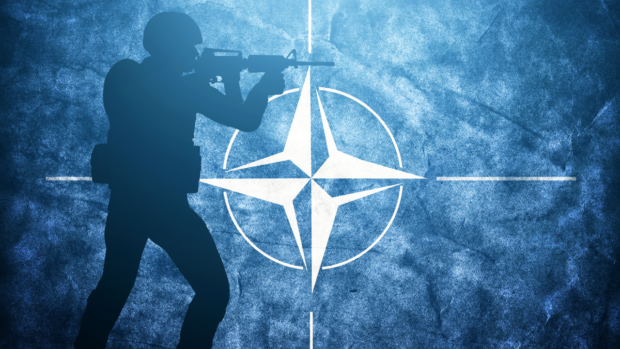 NATO flag with a silhouette of a soldier | INQ STOCK IMAGE

BRUSSELS –The process to ratify Sweden and Finland as the newest members of Nato was formally launched on Tuesday, the military alliance’s head Jens Stoltenberg said, marking a historic step brought on by Russia’s war in Ukraine.

“This is a good day for Finland and Sweden and a good day for Nato,” Stoltenberg told reporters in a joint press statement with the Swedish and Finnish foreign ministers.

“With 32 nations around the table, we will be even stronger and our people will be even safer as we face the biggest security crisis in decades,” he added.

The Nato secretary general was speaking ahead of a meeting in which the ambassadors from Nato’s 30 member states were expected to sign the accession protocols for the two Nordic countries, opening a months-long period for alliance countries to ratify their membership.

“We are tremendously grateful for all the strong support that our accession has received from the allies,” said Swedish Foreign Minister Ann Linde.

“We are convinced that our membership would strengthen Nato and add to the stability in the Euro Atlantic area,” she added.

In the wake of Russia’s invasion of Ukraine in February, Sweden and Finland in parallel announced their intention to drop their military non-alignment status and become part of Nato.

A Nato summit in Madrid last week endorsed that move by issuing invitations to the two, after Turkey won concessions over concerns it had raised and a US promise it would receive new warplanes.

Turkish President Recep Tayyip Erdogan had accused Sweden and Finland of being havens for Kurdish militants he has sought to crush, and for promoting “terrorism”.

But Erdogan has kept the rest of Nato on tenterhooks by saying he could still block Sweden and Finland’s bids if they fail to follow through on their promises, some of which were undisclosed, such as possible extradition agreements.