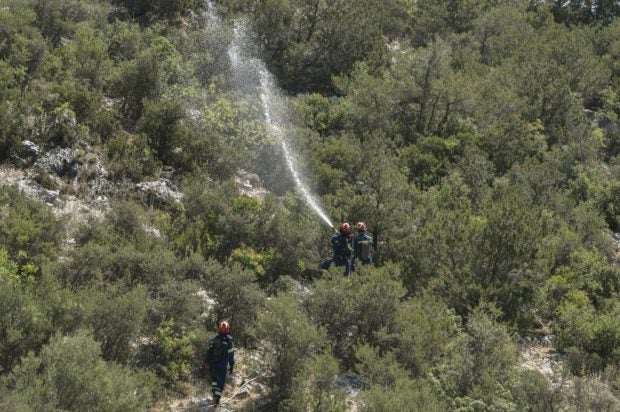 Scientists have warned that extreme weather and fierce fires will become increasingly common due to man-made global warming, and Greece’s conservative prime minister has linked blazes in the country to climate change.

Located at the foot of Mount Parnassus and stretching as far as the Gulf of Corinth, the grove in Amfissa, a town 280 kilometers (175 miles) north of Athens, contains hundreds of thousands of olive trees, many of them over 100 years old.

The fire started on Monday afternoon near the village of Sernikaki, 15 kilometers from the ancient archaeological site of Delphi.

An investigation has been launched into the cause of the blaze, which has not reached the 4th-century BC world heritage site, the authorities said.

Fanned by winds of up to 70 kilometers per hour (44 mph), the flames spread rapidly towards Amfissa.

The Civil Protection authorities warned at the weekend that high winds and temperatures of up to 35 degrees Celsius (95 degrees Farenheit) meant the fire risk this week was “very high” in some regions.

“Fifty-two forest fires have broken out over the past 24 hours,” Artopios said on Monday evening.

In the western Peleponnese, a fire that started in Ilia on Sunday was still burning on Tuesday.

In the east of the same region, a blaze near the village of Kranadi led to the evacuation of a hotel on Monday.

Last summer, heatwaves triggered some of the worst wildfires in Greek history, particularly on Evia, the country’s second-largest island.

A total of 103,000 hectares were destroyed and three people died.