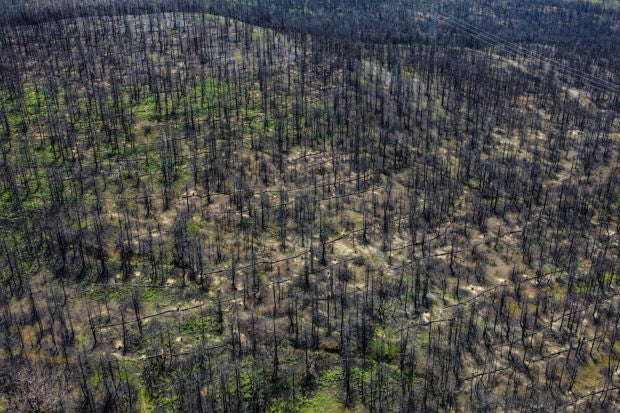 A photograph shows an aerial view of the burned areas in Limmi, Northern Evia, almost a year after the island’s devastating fires on June 17, 2022. AFP

LIMNI, Greece—Nearly a year after Greece’s second-largest island of Evia was devastated by some of the worst wildfires in the country’s history, nature is making a slow comeback.

Grass is growing on blackened mountainsides under the carcasses of burnt trees and birds are singing again.

And while the woods and meadows that once produced some of Greece’s best honey will likely need two decades to recover, experts say the best method is to let nature do the heavy lifting itself.

“There is rebirth, in some places better than others,” Nikos Georgiadis of the World Wildlife Fund Greece told AFP.

Thousands of locals and tourists fled from the north of the island amid apocalyptic scenes, with authorities forced to stage a mass evacuation to avoid a repeat of the 2018 fire near Athens that claimed over 100 lives.

Three people died in Greek wildfires last year during a brutal summer for a swathe of southern Europe from Spain to France, Italy, Croatia and Cyprus. Blazes also claimed lives in Turkey and Algeria. 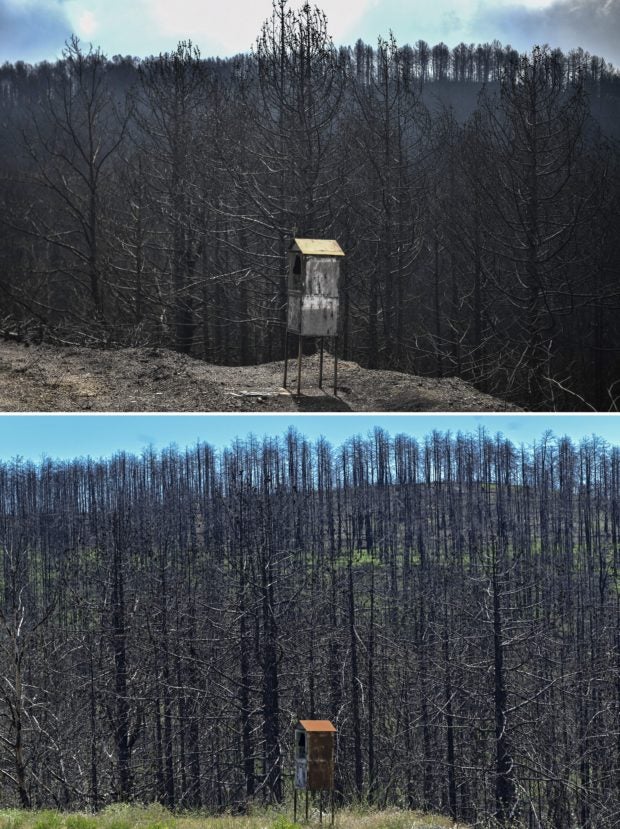 A combination of two photographs made on June 22, 2022 shows a burned out pine forest near the village of Kokkinomilia, in northern island Evia on August 2021 (TOP) and the same view on June 2022. AFP

Scientists have warned that extreme weather and fierce fires will become increasingly common due to man-made global warming, and Greece’s conservative prime minister has linked the blazes to climate change.

In the wake of the destruction on Evia, premier Kyriakos Mitsotakis pledged hundreds of millions of euros for reconstruction, reforestation and flood prevention works, and a 1.7-billion-euro ($1.78 billion) overhaul of the civil protection agency.

Forester Elias Apostolidis, whose company is involved in the state’s reconstruction plan, said inspections so far have shown that only a little human intervention is needed for regrowth.

The worst-hit zones — around five percent of the burned area — will be replanted with seeds gathered elsewhere on the island, he told AFP.

The fact that the destruction was so total in some areas also enables foresters to replant with more fire-resistant trees.

“We have recorded per species the percentage of plants that survived,” Apostolidis said.

For example, only six percent of black pine was saved, compared to 42 percent of broadleaf oak, he said.

“This means that some plants are more resistant than others. We now know practically how forests behave in relation to fire and we must take that into account in the future so that we can make them more resistant” to blazes, he said. 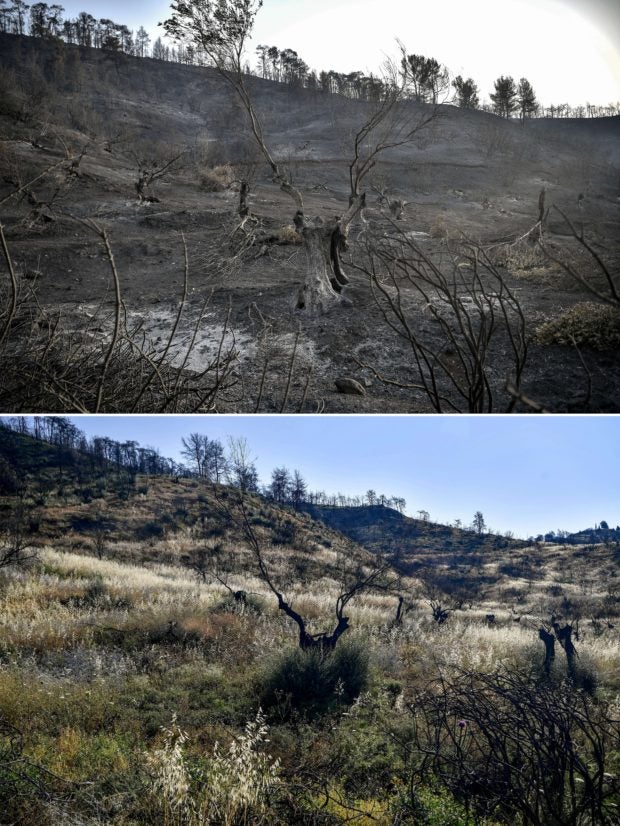 A combination of two photographs made on June 22, 2022 shows a burned out olive groove near the village of Rovies, in northern island Evia on August 2021 (TOP) and the same view on June 2022. AFP

But it will take “close to 20 to 25 years” for the forest to be restored, said WWF’s Georgiadis, provided that the area is not grazed and not hit by another wildfire.

Premier Mitsotakis vowed to “rebuild northern Evia better and more beautiful than it was”, announcing an aid package for the region worth 500 million euros.

The state has already removed unsavable trees in some badly affected areas and begun infrastructural works to assist reforestation and prevent soil erosion and flash floods.

But for many locals, it is already too late.

Giannis Dimou, a 66-year-old shepherd, lost more than 60 animals and his three goat folds in the fire.

He now has just a dozen animals left, not enough to keep him in business.

And because his pens were not fully licensed, he was not eligible for state help.

“There is nothing you can do with so few animals left,” he said. “We are done.”

The situation is equally dire for beekeepers on an island that was home to around 40 percent of national honey production.

“The beekeepers of the region are facing huge issues and essentially they won’t be able to collect honey from the area” for years and will have to move elsewhere, said Stathis Albanis, president of the Istiaia beekeepers cooperative.