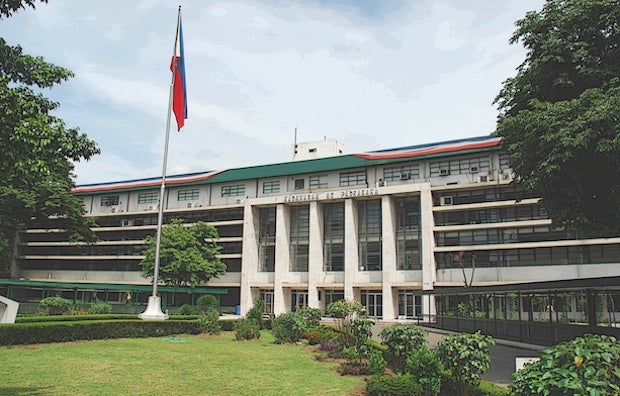 The Department of Agriculture in Quezon City (Photo from its website)

The closed-door meeting was held at the Bureau of Soils and Water Management Office in Quezon City.

Marcos Jr. earlier said he will head the DA “for now” to “make it clear to everyone what a high priority we put on the agriculture sector.”

According to the DA, Marcos Jr. discussed with agriculture officials and the transition team during the meeting “urgent matters in the agriculture and fisheries sector,” including the food supply and demand outlook.

He likewise stressed that agriculture is a top priority, noting that the sector will be “critical to the country’s economic transformation.”

Marcos Jr. previously said that two areas he thought should be his priorities as he takes on the role of agriculture chief: increase rice production and re-organize the agency.

P20 per kilo price of rice ‘not yet possible,’ says agri chief

Read Next
Calida on his designation as COA chair: As usual, we will win
EDITORS' PICK
Smart, TNT launch more powerful and value-packed Double GIGA+ 50 offer
Motorcycles, smartphones, and cash prizes up for grabs in TNT’s ‘Tuloy Ang Saya’ Raffle in Mindanao
Having confidential funds not a DepEd norm – Pimentel
Pagasa: No tropical cyclone expected in the next few days
NDRRMC confers posthumous award on 5 fallen Bulacan rescuers
House energy committee chair Arroyo bats for cheap electricity
MOST READ
Sharon Cuneta ‘turned away’ at Hermes boutique in Seoul, welcomed by LV
Marcos in Singapore for F1 Grand Prix – source
WATCH: Coleen Garcia dances with Billy Crawford in France’s ‘Dancing with the Stars’
Having confidential funds not a DepEd norm – Pimentel
Don't miss out on the latest news and information.