Calida on his designation as COA chair: As usual, we will win | Inquirer News

Calida on his designation as COA chair: As usual, we will win 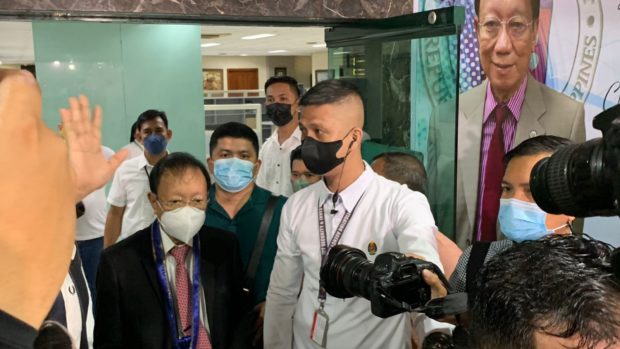 MANILA, Philippines — Newly designated Commission on Audit (COA) Chairperson Jose Calida has assured the public that if the agency would face any opponent in enforcing its mandate, it would win — like what usually happens.

Calida made the pronouncement after his first visit to the COA main office in Quezon City on Monday, saying they would win, just like how they have succeeded in several battles he has led in the Supreme Court.

“As usual, we will win. We will win kung may kalaban kami (if we have opponents), we will win,” he said when asked during an ambush interview about his marching orders to COA personnel.

In terms of assuring that COA would remain true to its mandate of watching government offices’ financial transactions, Calida claimed to make it bigger.

“Magiging giant ito, malaki na ito, palalakihin pa namin (This would be a giant, we would make it bigger),” he said.

(We would really guard taxpayer’s money because we have been winning in the Supreme Court, that’s why we’ll also win here.)

Calida arrived at the COA office around 10:30 a.m. and was welcomed by COA employees. He had a short briefing with the current COA officials, which he said went well.

He also noted that employees of the agencies are good, which means he would have no problems dealing with them.

“Empleyado, magaling ‘yong mga empleyado so wala akong problema sa kanila (Employees are good so I won’t have any problem with them,” he said.

“Well it’s good. As I said, this is my first day, so malaman ko rin (so I will learn) later on how good they are or how bad they are. But I want them to be good,” he added.

Calida’s appointment however draw flak from some netizens, who pointed out that his former office — the Office of the Solicitor General (OSG) — was flagged several times, even by COA, while he was at its helm.

Among the issues faced by the OSG were alleged undocumented travel expenses worth P1.16 million 2019; another travel expenses issue in 2018; and implementation of gender and development programs despite having no prior approval from the Philippine Commission on Women.

Calida however stressed that they acted within the bounds of the law, stressing that the high payments have been ongoing since the term of his predecessor, opposition figure, and former solicitor general Florin Hilbay.