Husband takes over from wife in Basilan’s Lamitan City 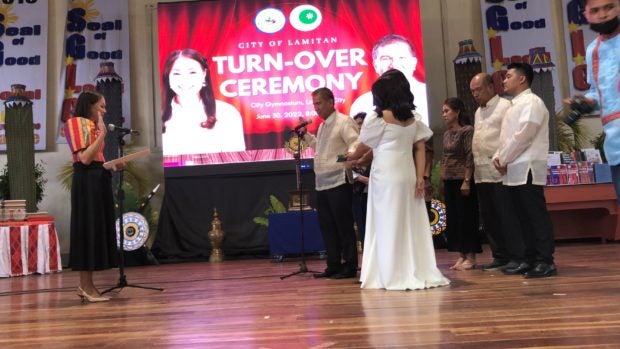 FROM ONE FURIGAY TO ANOTHER Lamitan Mayor Roderick Furigay takes his oath before his wife, outgoing Mayor Rose Furigay, while three of their daughters serve as witnesses, at the city’s gymnasium on Thursday. —JULIE ALIPALA.

LAMITAN CITY—Amid tight security on Thursday, Rose Furigay officially relinquished power to her husband, Roderick, who has returned to the top post of this capital city of Basilan province after winning the mayoral election in May.

The outgoing mayor’s last official act was to lead the inauguration of her husband and the newly elected city officials, administering their oath, witnessed by their respective families, some members of whom came all the way from the United States.

The woman mayor rose to power in 2013, succeeding into the post held by her husband for nine years since 2004. Roderick, in turn, was Rose’s vice mayor for nine years before he won again as mayor in May.

During her term, Rose improved fiscal management, raising local tax collection and instituting full disclosure of local government transactions. She also presided over the easing of the process of doing business in the city as well as making social services visible and accessible to a constituency of 100,150 people.

The transfer of power on Thursday also saw Rose bowing out of politics.

“I want to live (an ordinary) civilian life, a mother to my three daughters. It’s been nine years that I have been in politics, and right now, I just want to be a doting mother,” she said, adding: “Definitely no more politics for me.”

Roderick vowed to match his wife’s performance as a local leader, although he admitted it was a bigger shoe to fill.

“I am sure our people will really expect a lot from me. I will try my best. I may not surpass her accomplishment, but I will try to match her performance and accomplishments,” said Roderick.Roderick promised to focus the first 100 days of his three-year term on pushing for the building of an airport in the city.

The city government has already earmarked P30 million and the provincial government of Basilan has also committed to provide a similar amount for acquiring 100 hectares of land for the planned facility, and the development of a 2-kilometer airstrip. —Julie S. Alipala, INQ