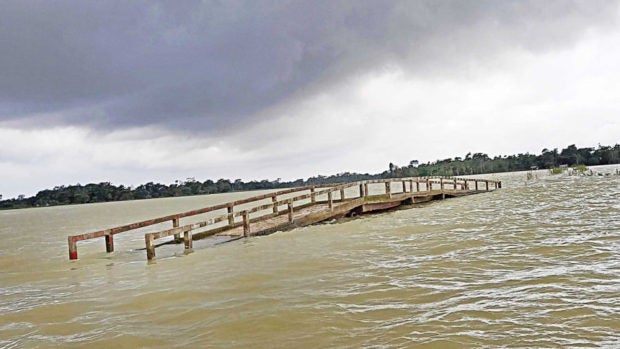 Only the top of this bridge is visible above the floodwaters in Nandirgaon union of Gowainghat upazila of Sylhet, while the dark and heavy clouds threaten tougher times ahead. The photo was taken yesterday. Photo: The Daily Star/Asia News Network

DHAKA — People of the northern and northeastern districts of Bangladesh are fearing a second spell of floods as major rivers continue swelling amid torrential rain and onrush of water from upstream.

The first phase of the floods hit in the second week of this month and water had started receding from June 22, but things took a turn for the worse over the last two or three days.

Around a dozen small transboundary rivers in the two districts were also swelling, according to officials of Water Development Board (WDB).

Flood Forecasting and Warning Centre (FFWC) in its forecast at 9:00am Wednesday said the flood situation in Sylhet and Sunamganj districts may deteriorate slightly in the next 24 hours.

Besides, the major rivers in the northern districts may rise rapidly during this period, according to the forecast.

Six rivers across the country were flowing above danger level Wednesday, it said.

In the northern district of Lalmonirhat, water level of the Dharla and the Teesta increased in the last two days due to incessant rain and onrush of water from upstream.

Low-lying villages of Mogholhat, Kulaghat and Barabari unions in Lalmonirhat Sadar upazila have been inundated again due to the recent rise in water level, said locals.

“In the first phase, we had to leave our house and stay at a flood shelter for 10 days. We returned home on June 22 as the water had receded. But our house has gone under around three feet of water today [Wednesday],” said Sakhina Bewa, 60, a resident of Char Falimari village in Mogholhat union.

“If water continues rising, we will have to leave our house again and go to the shelter,” she told The Daily Star Wednesday.

“Our house was damaged by flooding in the first phase and we are yet to repair it. The flood has hit us again and it has become very difficult for us to survive,” said Nazrul Islam, 65, a farmer of Char Shiberkuti village at Kulaghat union.

In Sirajganj, the Jamuna started swelling again since Wednesday morning.

“The water level was receding for the last four days. But it has started rising again today [yesterday] due to excessive rain upstream. If the rains continue, flood may hit the region again,” said Md Nasir Uddin, sub-divisional engineer of WDB in Sirajganj.

Flood-hit people are in fear of further hardship.

“We have been stuck in floodwater for the last couple of weeks. We have come to a flood shelter and then felt relief as we saw water receding. That relief was short-lived … we are worried again as the water is rising once more. We don’t know when we will be able to return home,” said Sharif Hossain, a resident of Choto Koyra village in Sirajganj Sadar upazila.