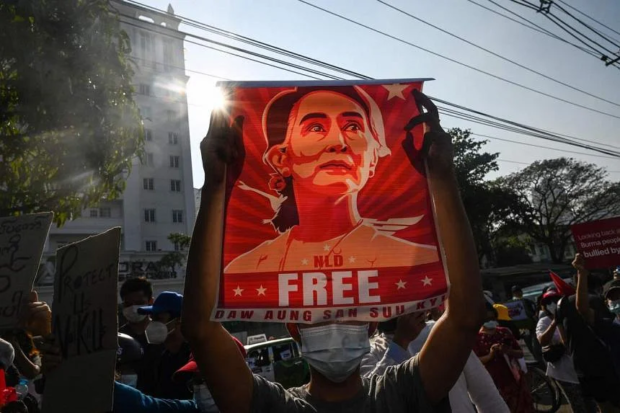 Asean special envoy Prak Sokhonn had appealed against the decision to transfer Aung San Suu Kyi from a home to a jail in Naypyitaw. PHOTO: AFP

BANGKOK — Asean special envoy Prak Sokhonn traveled to Myanmar on Wednesday (June 29) for the second time in three months as part of the bloc’s effort to tackle the country’s political crisis.

His visit comes just two days after he issued a statement appealing against the Myanmar junta’s decision to transfer deposed state counsellor Aung San Suu Kyi from a home to a jail in Naypyitaw.

The 77-year-old leader was under house arrest after the coup last year and has been charged with more than a dozen offenses, including corruption.

According to Myanmar media outlet Irrawaddy, Mr Sokhonn will not meet Ms Suu Kyi this time, but instead six minor ethnic armed groups that are not fighting the junta.

During his first visit in March, he met mostly Myanmar junta leaders or officials appointed by the junta. He warned then that the situation would take a long time to be resolved.

Myanmar’s turmoil has only deepened since the coup, while Asean has made little headway tackling this since declaring a road map in April last year.

More than 500 self-styled “people’s defence forces” are currently waging armed insurgency against the junta, which annulled the 2020 General Election shortly after seizing power.

According to an update released on Tuesday by the United Nations Office for the Coordination of Humanitarian Affairs, more than 758,000 people have been forced to leave their homes and about 18,000 civilian properties have been torched or destroyed.

Cambodia, which is chairing Asean this year under a rotating arrangement, has come under pressure over the question of which party should get to represent Myanmar at multilateral forums.

While junta chief Min Aung Hlaing has been shut out of high-level Asean summits, and junta foreign minister Wunna Maung Lwin was not invited to the bloc’s foreign ministers’ meeting in February this year, junta defence minister Mya Tun Oo was allowed to take part in an Asean defense chiefs’ meeting earlier this month.

Meanwhile, Cambodian Prime Minister Hun Sen was reportedly rebuffed after he urged Senior General Min Aung Hlaing to reconsider executions of opposition members, saying they would have a “devastating effect” on Asean’s efforts to support Myanmar’s return to normality.

Asean’s blueprint calls for the cessation of violence, for Asean to provide humanitarian aid, and for an Asean special envoy to meet all stakeholders and help facilitate an inclusive political dialogue.

A statement released prior to Mr Sokhonn’s visit this week said his delegation aimed to “contribute to building an environment conducive to an inclusive political dialogue through the meetings with all parties concerned”.

While the junta has said it wants to hold another general election next year, there is scepticism that it can be free or fair, given that the military’s key political opponents remain behind bars or are on the run.

United Nations special envoy Noeleen Heyzer told the UN General Assembly on June 13 that “there is little confidence in a process administered by the military-appointed Union Election Commission”.

She added: “Without an inclusive political dialogue and conditions that permit citizens to freely exercise their political rights without fear or intimidation, this will further exacerbate violence and instability.”

Read Next
Fresh floods loom as Bangladesh rivers keep swelling
EDITORS' PICK
Heads may roll at BOC, says Palace if sugar smugglers are allowed to use recycled import permits
Palace: Biggest supermarkets in PH commit to sell sugar at P70 per kilo
What to watch out for when selecting a video surveillance solution
House energy committee chair Arroyo bats for cheap electricity
vivo brings to the Philippines a powerful smartphone with a slimmer body, the vivo Y02s for only PHP 6,499
DOH reports increase in daily COVID-19 deaths, mostly unvaxxed
MOST READ
Alyssa Valdez to miss Creamline’s AVC Cup campaign
Brian Poe-Llamanzares receives his PhD in Public Administration
Mayor bares issues vs closed QC school
Peso loses ground vs US dollar
Don't miss out on the latest news and information.