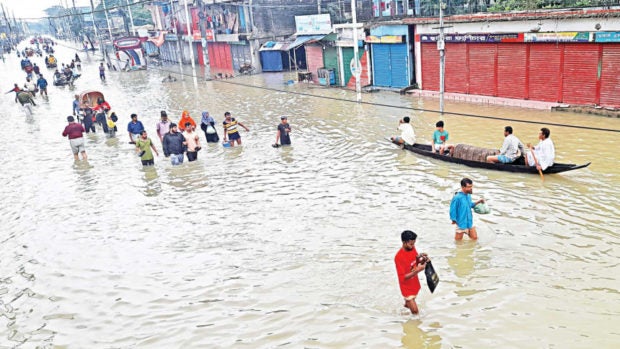 With floodwater swamping their homes, people from Dakkhin Surma upazila wade through knee-deep water on Bangabir road in Chandipul area to reach Sylhet city. Seeking food and shelter, many flood-hit people are trying to move to the city from different parts of the district. The photo was taken yesterday afternoon. Photo: Sheikh Nasir via The Daily Star/Asia News Network

DHAKA — The floods wreaking havoc in the Bangladesh’s northern and north-eastern districts may worsen as water levels in already overflowing rivers could continue to rise over the next two days, according to the Flood Forecasting and Warning Center.

“The Brahmaputra-Jamuna, Ganges-Padma, Surma, Kushiyara, Teesta, Dharla, Dudhkumar and all other major rivers may continue rising for the next 48 hours,” said an FFWC forecast released at 6:00pm Sunday.

In Sylhet, Sunamganj and Netrakona districts, the situation may get worse in the next 24 hours due to moderate to heavy rainfall in the northern and north-eastern regions of the country along with the adjoining Indian states of Assam, Meghalaya and West Bengal.

The rush of water from upstream in India as well as heavy rainfall in the region have left large swathes of Sylhet division and northern regions inundated, affecting lakhs of people.

The FFWC has also forecast that the situation in low-lying areas in Lalmonirhat, Nilphamari, Rangpur, Kurigram, Gaibandha, Bogra, Jamalpur and Sirajganj districts could deteriorate further.

Flood water may even inundate low-lying areas of the country’s central districts like Tangail, Munshiganj and Shariatpur, the forecast added.

Water of nine rivers across the country was flowing above the danger level Sunday morning, the bulletin said, adding that 11 districts have so far been affected by the ongoing flood.

Meanwhile, due to flash floods, thousands of people of the north-eastern region have been facing acute crises of food and drinking water.

The cry for relief is intensifying in flood-hit areas despite the government agencies working to provide relief.

“We have taken shelter on the road as our house has been submerged. But we have not gotten any food assistance from the government till now. A kind person gave us some food,” said Akbar Hossain, who took shelter on the Sylhet-Companiganj Road in Shalutikar area of Sylhet’s Gowainghat upazila.

“Hundreds of people have taken shelter in the government primary school in Chaila Afzalabad union of our upazila. But we have not been given any relief. We cannot even buy food as shops have been closed for days,” said Swadhin Pintu, a resident of Chhatak upazila in Sunamganj.

However, government officials concerned in Sylhet and Sunamganj districts said around three lakh people and around one lakh cattle have taken shelter in 717 flood centres in the two worst-hit districts.

They said Tk 65 lakh in cash, 1,062 tons of rice and around 12,900 sacks of dry food have so far been distributed among flood victims in the two districts.

Besides, cooked foods have been distributed among 30,000 affected people, they said, adding that 260 medical teams have been working to provide medical services to victims.

Sylhet’s Divisional Commissioner Muhammad Mosharrof Hossain said at least four million people have been affected by the flood in the region and the number is increasing.

Locals said many people have taken shelter on nearby highways or river banks as the flood centers are either overcrowded or located far away from their homes.

Bangladesh Army, Bangladesh Navy, police, Border Guard Bangladesh and several other agencies along with local administration have been working to rescue stranded people.

Meanwhile, train services on the Dhaka-Sylhet route resumed Sunday noon after suspension of around 24 hours as the flood water receded in some areas, said railway officials.