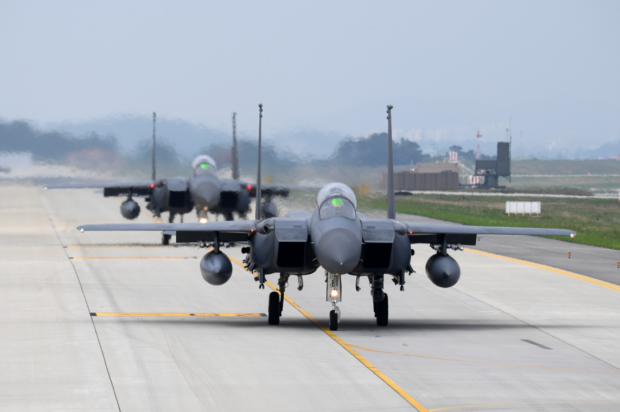 SEOUL — The South Korean Air Force on Monday kicked off a large-scale aerial military exercise to enhance combat readiness and prepare for possible “enemy provocations,” including a surprise invasion.

The theater-level “Soaring Eagle” combat training exercise is being staged over five days through Friday at the 29th Tactical Fighter Weapons Group located at an air base in the central city of Cheongju, North Chungcheong Province.

South Korea’s Air Force has conducted the Soaring Eagle exercise twice a year since 2008 with the goal to maintain a firm defense posture in airspace and prepare combat-ready pilots for potential future contingency missions.

The aerial drill is staged in a simulated, high-threat combat environment, which puts fighter pilots and support personnel through scenarios such as a “large-scale, surprise invasion by enemy’s air forces,” the Air Force said Monday in a statement.

The Air Force explained that pilots are able to “master combat skills to effectively respond to aerial threats posed by the enemy through experiencing the enemy’s tactics” in the simulated environment.

The Air Force conducts various types of military drills, including defensive operations to detect, identify and intercept enemy air targets as well as large-scale offensive operations led by an airstrike package to “punish and strike the enemy’s core power and the origin of provocations.”

The training exercises for battlefield air interdiction, which is an air operation conducted to destroy an enemy’s military potential such as missile bases and supplies en route to the battlefield, are staged in a simulated combat environment.

“The exercise aims to develop the (Air Force’s) ability to quickly respond to enemy provocations and ensure that we are equipped with the best operational capabilities by verifying the ability to strike high-threat targets,” said Col. Lee Chul-woo, head of the 29th Tactical Fighter Weapons Group.

“We will maintain a flawless defense posture in the airspace through intensive and realistic training so that we can immediately and quickly respond to any kind of enemy provocations.”

The training systems, which were introduced in late March, provide real-time information such as altitude, direction, location and speed of aircraft flying in the air, and notify of aircraft launching an armed attack.

The Air Force also plans to operate fourth- and fifth-generation fighters together in a training environment to verify aircraft integration this year.

The Soaring Eagle exercise is open to the public for the first time since 2017, although the Air Force has conducted the large-scale exercise regularly in that time. The South Korean military had stopped publicly sharing information on the aerial drill in 2018 when the two Koreas thawed relations and established an atmosphere for reconciliation.

The Air Force reportedly has decided to publicly announce the beginning of the Soaring Eagle exercise in light of the changing security environment on the Korean Peninsula.

Under the Yoon Suk-yeol government, the military expects to publicize standalone and combined military exercises as a counteraction to North Korea’s record-breaking flurry of missile launches.

The South Korean, US and Japanese defense chiefs this month also committed to regularizing and publicizing trilateral warning and ballistic missile search and tracking exercises that have been conducted regularly but at a low profile until now. The decision aims to send a message to the Kim Jong-un regime, which has launched 31 ballistic missiles in less than six months this year.