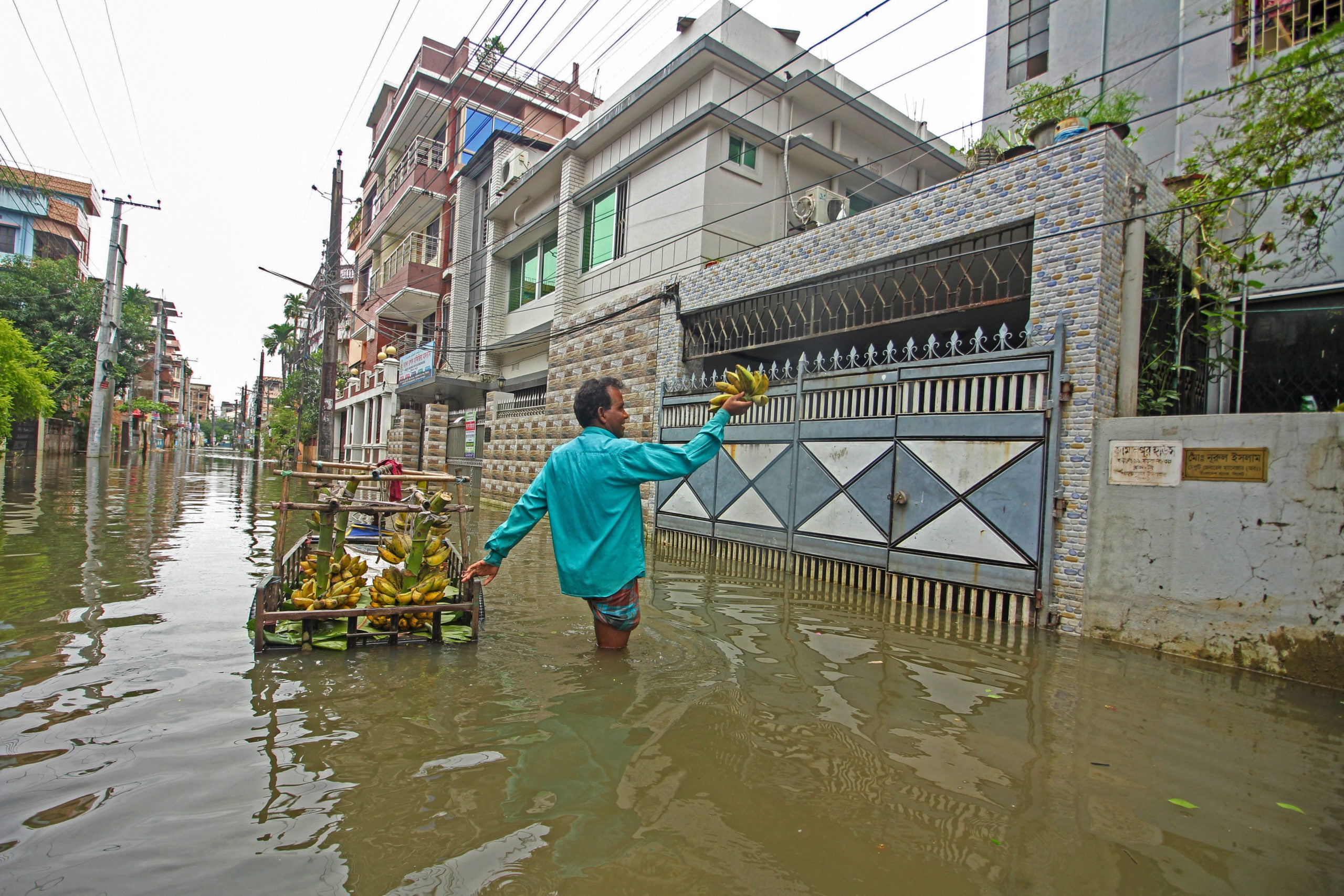 A fruit vendor sells bananas along a flooded street following heavy rains in Sylhet on May 21, 2022. (Photo by Mamun Hossain / AFP)

SUNAMGANJ, Bangladesh — North-east Bangladesh’s worst floods in nearly 20 years began receding on Sunday, but rescue workers were struggling to help millions marooned by extreme weather across the region that has killed around 60 people.

Floods are a regular menace to millions of people in low-lying Bangladesh and neighboring northeast India, but many experts say that climate change is increasing the frequency, ferocity and unpredictability.

In the past week after heavy rains in India, floodwater breached a major embankment in Bangladesh’s Sylhet region, affecting around two million people, swamping dozens of villages and killing at least 10.

Arifuzzman Bhuiyan, head of the state-run Flood Forecasting and Warning Centre, told AFP that the floods had hit some 70 percent of Sylhet district and about 60 percent of neighboring Sunamganj.

“It is one of the worst floods in the region,” he told AFP.

But he said the situation would improve further in the next few days after heavy rains stopped.

Police said that a scuffle broke out in the rural town of Companyganj on Saturday as authorities stepped up relief operations for the roughly two million people hit.

“There were more flood-affected people than the estimated relief packs. At one point everyone started to snatch relief goods when police dispersed the crowd,” local police chief Sukanto Chakrobarti told AFP.

Mozibur Rahman, head of Sylhet district, said that the embankment washed away along the Bangladesh-India border was yet to be repaired.

“It is impossible to fix the embankment unless waterflow from India plunges. The inundation scenario in Sylhet city has improved. But outer towns are still underwater,” Rahman said.

“We are trying to send relief and have opened hundreds of shelters for the flood-hit people.”

Mofizul Islam, a resident of Sylhet city where floodwaters were slowly subsiding, said that he fell off his motorbike after he hit a pothole hidden under the water on Sunday.

“It is very risky for the people who are going out today,” Islam told AFP.

Over the border in India, around 50 people have been killed in days of flooding, landslides and thunderstorms, according to local disaster management authorities.

In the north-eastern state of Assam, authorities said on Sunday that the death toll from the floods had reached 18.

According to the Assam State Disaster Management Authority (ASDMA), almost 3,250 villages were partially or fully submerged.

ASDMA officials said the situation had improved slightly but that it remained critical in some districts.

According to their estimate, more than 92,000 people were in relief camps.

The state and national rescue forces, helped by the army, were working to rescue people from villages and distribute food, clean drinking water and other essentials, as well as to clear roads.

West of Assam, at least 33 people were killed in Bihar state in thunderstorms on Thursday.

Bihar, in common with other parts of northern India and Pakistan, has been suffering an intense heatwave, with temperatures reaching 40 degrees Celsius (104 degrees Fahrenheit).