‘It was hell,’ survivors say of Russian missile strike on busy mall in Ukraine | Inquirer News 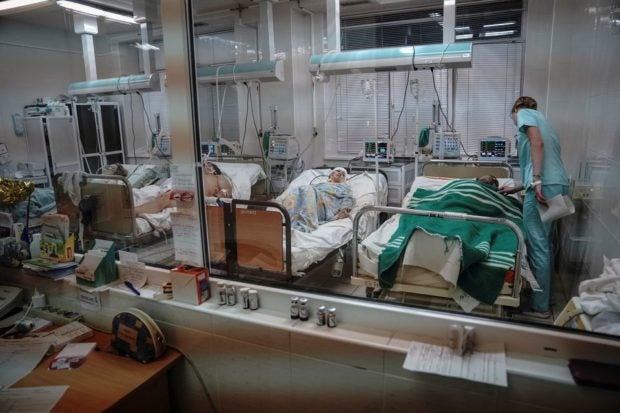 People wounded in a shopping mall hit by a Russian missile strike are treated in a hospital, as Russia’s attack on Ukraine continues, in Kremenchuk, in Poltava region, Ukraine June 27, 2022. REUTERS

KREMENCHUK, Ukraine — In a central Ukrainian intensive-care ward, five people are crammed into a room, their wounds bound up in bloodied bandages. A dead body lies on a stretcher outside, covered in a blanket.

This is the aftermath of a missile strike on a busy shopping mall in the city of Kremenchuk on Monday, southeast of Kyiv, an attack one of the patients described as “hell”.

According to Ukraine’s emergency services the strike has killed at least 16 people and injured 59.

“This is the sixth time the city has been bombed” since Russia invaded Ukraine on Feb. 24, said Oleksandr Kovalenko, deputy director of the surgery department at Kremenchuk’s public hospital. “But never before did it hit so many people.”

The hospital is treating 25 people injured in the attack, six of them in critical condition, he told Reuters.

The strike drew a global outcry, with leaders of the Group of Seven major democracies, gathered for a summit in Germany, condemning it as “abominable”.

“This is not an accidental hit, this is a calculated Russian strike,” Ukrainian President Volodymyr Zelensky said in an evening video address. He said the death count could rise.

He estimated around 1,000 people were in the mall at the time of the strike. The city had a population of 217,000 before the invasion.

People lined up at a hotel near the mall to register the names of those missing. More than 40 people had been reported missing, Ukraine’s prosecutor general’s office said.

Rescue workers continued to sift through the rubble to look for survivors.

One patient in the hospital’s general ward, Ludmyla Mykhailets, 43, said she was shopping at an electronics store with her husband, Mykola, when the blast threw her into the air.

“I flew head first and splinters hit my body. The whole place was collapsing. Then I landed on the floor and I don’t know if I was conscious or unconscious,” she said, adding she had broken her arm and split her head open.

“It was hell,” added Mykola, 45, blood seeping through a bandage wrapped around his head.

Outside the hospital, a small group of mall workers were filled with worry and grief, but also relief.

Hearing an air-raid siren, they had made their way to a nearby basement when the missiles struck, said Roman, 28, who asked to be identified by only one name.

He added that many others had stayed inside as the mall’s management had three days ago allowed shops to remain open during air raid sirens.

Many Ukrainians have stopped reacting to the now regular warning sirens as strikes have been occurring less frequently outside of Ukraine’s battle-torn east.

Back in the intensive-care ward, Yulia, a 21-year-old woman covered with deep cuts, said Monday was her first day working in one of the stores in the mall.