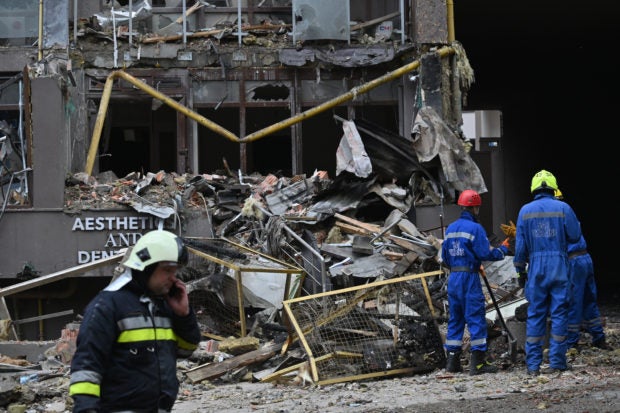 Ukrainian rescuers work outside a damaged residential building hit by Russian missiles in Kyiv on June 26, 2022, amid Russian invasion of Ukraine. AFP

Russian strikes hit a residential building in Kyiv in the first attack on the capital in almost three weeks, Ukraine says.

The top three floors of a building in the Shevchenkivsky neighbourhood were completely destroyed and several fires broke out, spewing thick smoke.

Russia says its strike on Kyiv hit a weapons factory, dismissing as “fake” reports that it struck a residential area of the Ukrainian capital.

The Artyom factory “was the target, as military infrastructure”, the Russian defence ministry says, adding that it had already been targeted in April.

Russia says its forces carried out strikes against three military training centres in northern and western Ukraine, including one near the Polish border.

Among the targets was a military training center for Ukrainian forces in the Starychi district of the Lviv region, around 30 kilometers (19 miles) from the border with Nato member Poland.

The other two training centers were in the central Zhytomyr and northern Chernigiv regions.

Konashenkov did not say when or from where the missiles were fired.

But Kyiv on Saturday said Russia had carried out strikes from Ukraine’s northern neighbour Belarus. Moscow did not comment on the claim.

On the sidelines of the G7 summit, both leaders “agreed this is a critical moment for the course of the conflict, and there is an opportunity to turn the tide in the war”, Downing Street says.

But Johnson cautions that “any attempt to settle the conflict now will only cause enduring instability”.

US President Joe Biden and his counterparts from the world’s most industrialized nations are gathering at Elmau Castle in the German Alps, before talks with Nato partners in Madrid.

“We have to stay together,” Biden tells German Chancellor Olaf Scholz, the host of the three-day gathering.

Putin had been hoping “that somehow Nato and the G7 would splinter”, Biden says. “But we haven’t and we’re not going to.”

Canada deploys two warships to the Baltic Sea and North Atlantic, joining a pair of frigates already in the region, to reinforce Nato’s eastern flank in response to Russia’s invasion of Ukraine.

Her Majesty’s Canadian Ships (HMCS) Kingston and Summerside set sail for a four-month deployment as part of “deterrence measures in Central and Eastern Europe” launched in 2014 after Moscow annexed Crimea, the Canadian navy says in a statement.

World leaders mock Putin’s tough-man image at a G7 lunch in Germany, joking about whether they should strip down to shirtsleeves — or even less.

“Jackets on? Jackets off? Do we take our coats off?” Britain’s Johnson asks as he sits down at the table in Bavaria’s picturesque Elmau Castle, where Scholz was hosting the summit of seven powerful democracies.