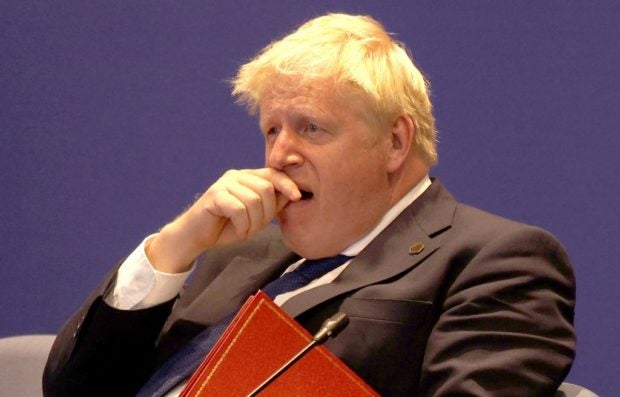 Britain’s Prime Minister Boris Johnson yawns as he sits alongside other leaders during the Leaders’ Retreat executive session on the sidelines of day six of the 2022 Commonwealth heads of Government meeting at the Intare Conference centre in Kigali, on June 25, 2022.  AFP

US President Joe Biden and his counterparts from the world’s most industrialized nations are gathering at Elmau Castle in the Bavarian Alps before they continue on to Madrid for talks with Nato partners.

They will seek to close ranks in their backing for Ukraine against Russia’s invasion while grappling with the intensifying global fallout of the war.

From soaring inflation to a looming food crisis and energy shortages, Russia’s invasion of Ukraine, now in its fifth month, has mired the world in a series of crises.

The leaders will also be confronted with the looming threat of recession as well as pressures over climate change.

In a show of their resolve to heap pressure on Moscow, the G7 announced that it will outlaw imports of Russian gold which the US said is the second largest export for Russia and a significant source of revenue for Vladimir Putin and his allies.

According to the White House, Russia accounted for about five percent of all gold exports in 2020 and 90 percent of Russia’s output went to G7 countries — mostly to Britain.

Western allies have been scrambling to coordinate their response since Russia sent its troops flooding into Ukraine on February 24.

While they have hammered the Russian economy with unprecedented sanctions, Putin’s armies have been digging in their heels for a drawn-out war.

Ahead of the talks, British Prime Minister Boris Johnson urged allies not to waver in their support.

“Ukraine can win and it will win. But they need our backing to do so. Now is not the time to give up on Ukraine,” he said, as Britain announced another $525 million in guarantees for World Bank lending later this year.

Ukrainian President Volodymyr Zelensky will make the same plea when he joins in via video-link on Monday.

John Kirby, National Security Council spokesman at the White House, said the G7 will be seeking to hold Russia accountable and to increase the costs and consequences of the war on Putin and his economy.

At the same time, they will aim to minimise “as much as possible the effect of these rising oil prices and the way (Putin) has weaponised energy”.

The fallout on the economy will be at the centre of the G7’s opening session.

Just six months back, the global economy had been poised for a huge post-pandemic recovery but it is now staring down the barrel of a recession.

“Core problems that are on the top of mind for all of us” include “rising prices, supply chain disruptions, all exacerbated by this war in Ukraine”, said Kirby.

Scarred by a reliance on Russian energy that has hampered several European nations including Germany and Italy from going all out to punish Putin’s Russia, the G7 was also warily looking at China — which it views as a systemic rival.

“The impact that China’s coercive economic practices, use of forced labor, intellectual theft — all those are front and center for the G7, and I think you’re going to see China very much at the forefront as the G7 goes on,” said Kirby.

As the gulf separating Western allies from Russia and China widens, the G7 will also be looking to rally other major players to its side.

To this end, German Chancellor Olaf Scholz has invited the leaders of Argentina, India, Indonesia, Senegal and South Africa to the Alpine summit.

While Argentina and Indonesia voted at a crucial UN vote to condemn Russia, the other three abstained.

But all are being directly hit by a looming hunger crisis sparked by the holdup in grain and wheat exports from Ukraine, and India for instance has imposed restrictions on wheat exports.

Read Next
Robredo says there is need to discuss giving VP ‘bigger mandate’
EDITORS' PICK
Heads may roll at BOC, says Palace if sugar smugglers are allowed to use recycled import permits
DOH reports increase in daily COVID-19 deaths, mostly unvaxxed
vivo brings to the Philippines a powerful smartphone with a slimmer body, the vivo Y02s for only PHP 6,499
House energy committee chair Arroyo bats for cheap electricity
Palace: Biggest supermarkets in PH commit to sell sugar at P70 per kilo
What to watch out for when selecting a video surveillance solution
MOST READ
DepEd to give teachers P5K cash allowance within first week of classes
Alyssa Valdez to miss Creamline’s AVC Cup campaign
DOJ indicts bank officer in $2.1 billion Wirecard fiasco
Jessy Mendiola, Luis Manzano open up on pregnancy journey: ‘You’ll never really be ready’
Don't miss out on the latest news and information.