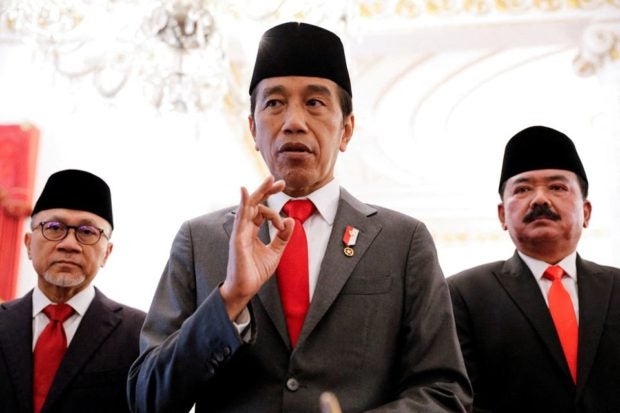 Indonesian President Joko Widodo speaks to the media, as newly inaugurated Trade Minister Zulkifli Hasan and Minister of Agrarian Affairs and Spatial Planning Hadi Tjahjanto, who was former Indonesia’s military chief, stand besides him at a Presidential Palace in Jakarta, Indonesia, June 15, 2022. REUTERS

JAKARTA — Indonesian President Joko Widodo, the chair of the Group of 20 (G20) nations, will urge Russia and Ukraine to rekindle peace talks, and seek ways to free up grain exports to global markets when he visits Moscow and Kyiv in the coming days.

President Widodo, better known as Jokowi, is one of six world leaders the United Nations appointed as “champions” of a Global Crisis Response Group (GCRG), formed to address the threat of an “unprecedented wave of hunger and destitution” resulting from the war in Ukraine.

“War has to be stopped and global food supply chains need to be reactivated,” Jokowi said before leaving Jakarta to attend a meeting with leaders of the Group of Seven industrialized nations in Germany.

Food and fertilizer products from Russia and Ukraine needed to be “reintegrated into the global market, despite the war,” Indonesian foreign minister Retno Marsudi said on Sunday.

“It is necessary to secure a grain corridor from Ukraine and open food and fertilizer exports from Russia.”

Before the war, Ukraine had been one of Indonesia’s biggest wheat suppliers.

After the G7 meeting, Jokowi will travel to Kyiv to meet Ukrainian President Volodymyr Zelensky and to Moscow for talks with Russian President Vladimir Putin. The Indonesian leader said he will urge Putin to agree to a ceasefire.

The Indonesian state palace has not released Jokowi’s schedule but Russian state media has said he will visit Moscow on Thursday.

As this year’s chair, Jokowi will host a G20 summit in Bali in November. Some nations have threatened a boycott if Putin attends, and in a bid to defuse some of the tension, Indonesia has invited Ukraine to join the summit, although it is not a member of the G20.

“The first step will be to get confirmation from both leaders to come to the G20 meeting in Bali,” said Wahid Supriadi, a former diplomat and Indonesian ambassador to Russia from 2016-2020.

Jokowi enjoys a “very good” relationship with Putin, Supriadi said, and Indonesia could even host an initial dialogue between the two countries.

Jokowi, a former businessman turned politician serving his second and final term, has recently taken a more active role in foreign affairs, including in regional efforts to bring peace to Myanmar after last year’s coup.

Ben Bland, director of the Asia-Pacific Programme at Chatham House, said Indonesia’s chances of finding common ground between the Russian and Ukraine leaders “were very minimal”.

“But, as one of the world’s biggest developing countries and a friendly partner of both Russia and Ukraine, Indonesia is an important voice on the global stage.”

Indonesia conducts what it describes as an “independent and active” non-aligned foreign policy, which means endeavoring to remain neutral.

And it belongs to a small group of nations including Israel and India that have a close relationship with the United States but also talk to Russia.

“If we want to try and get to some sort of peaceful negotiation and settlement, those are the types of countries that can help,” said Derek Grossman, a senior defense analyst at the RAND Corporation, though he had low expectations for Jokowi to make headway during his forthcoming trip.