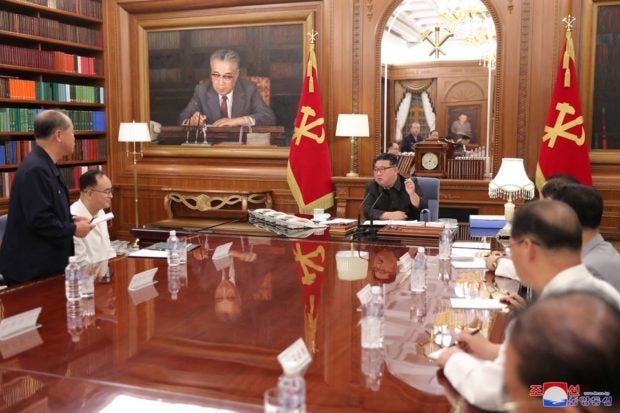 North Korean leader Kim Jong Un presides over the enlarged meeting of the Secretariat of the Central Committee of the Workers’ Party of Korea in Pyongyang, North Korea, June 27, 2022 in this photo released by the country’s Korean Central News Agency (KCNA). KCNA via REUTERS

SEOUL — North Korean leader Kim Jong Un presided over another meeting of the ruling party to tighten discipline, state media said on Tuesday, as Pyongyang continues to fight the COVID-19 pandemic and gears up for potential flood damage from heavy rains.

The enlarged meeting of the Secretariat of the Central Committee of the Workers’ Party of Korea was held on Monday to discuss “improving and readjusting the work system of Party guiding organs at all levels,” the North’s official KCNA said.

State media did not elaborate how the party system was adjusted, but during another secretariat meeting held about two weeks ago, Kim had ordered preserving discipline against “abuse of power and bureaucratism revealed among some Party officials.”

Kim has been holding a series of party meetings in recent weeks as Pyongyang battles an intestinal epidemic outbreak following a wave of COVID infections, with the start of the rainy season earlier than usual adding concerns over the crop output in a country already suffering from chronic food shortages.

“Farm villages across the country are putting efforts into protecting paddy rice from rainstorm during the rainy season,” KCNA said on Monday.

In an apparent effort to drum up internal unity in the face of the back-to-back disease outbreaks, the KCNA said the country has been conducting “ideological work” to “inform the masses of the validity and scientific accuracy of the emergency anti-epidemic policies enforced by the Party and the state.”

The North has claimed the COVID wave has shown signs of subsiding, though experts suspect under-reporting in the figures of released through government-controlled media.

Pyongyang has been daily announcing the number of fever patients without specifying them as COVID patients, apparently due to a lack of testing kits.