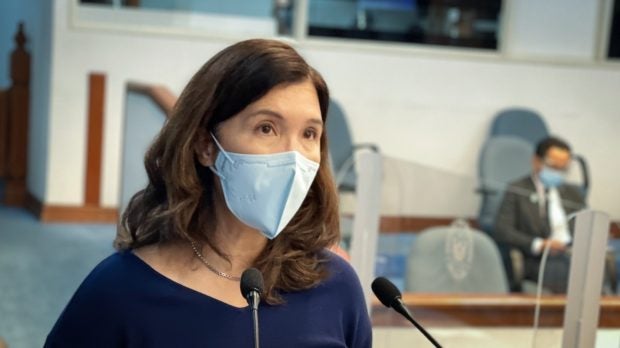 FILE PHOTO: Senator Pia Cayetano – Cayetano reveals on Monday, June 27, 2022, that the enrolled copy of the Vape Bill was already submitted to Malacañang for signature last June 24 – a move that she describes  as a “devious attempt to evade scrutiny by the outgoing administration.” (Voltaire F. Domingo/Senate PRIB)

MANILA, Philippines —  Citing “reliable information,” Senator Pia Cayetano has revealed that the enrolled copy of the Vape Bill was already submitted to Malacañang for signature last June 24 – a move that she described  as a “devious attempt to evade scrutiny by the outgoing administration.”

Cayetano pointed out that the transmittal of the bill was done just three working days before President Rodrigo Duterte’s term in office ends by noon on June 30.

“Five months have passed since the Senate and House approved the bicameral version of the Vape Bill on January 26. And so clearly, the transmittal of the bill at this late hour is a devious attempt to evade scrutiny by the outgoing administration, and to get the bill passed on to the next administration,” she said in a statement on Monday.

“Despite the shortness of time,” the senator said the President and his team could still act on the bill at noon of June 30.

(The Philippine President has until 11:59 p.m. of June 30. I hope he will fight to the very end for the Filipinos’ health.)

She reiterated and echoed the appeal of  medical associations and health groups, including the Department of Health, Food and Drug Administration, and  Department of Education,  for Duterte to veto the bill “as one of his final acts of service to Filipinos.”

“I know our President as a staunch health and anti-smoking advocate,” Cayetano said.

If enacted into law,  the senator warned that the measure  “masquerading” as a health bill will promote vaping and overturn the protective measures they fought for under the Sin Tax Law.

“It’s shocking, to say the least, if we consider how differently the US is addressing this vape pandemic,” she said. “The US FDA recently banned Juul, and yet, here in the Philippines, we will loosen the restrictions by making the Vape Bill a law?”

Cayetano and outgoing Senator Francis “Kiko” Pangilinan voted against the bill in the upper chamber.

Read Next
Fire hits residential area in Quiapo
EDITORS' PICK
vivo brings to the Philippines a powerful smartphone with a slimmer body, the vivo Y02s for only PHP 6,499
Palace: Biggest supermarkets in PH commit to sell sugar at P70 per kilo
What to watch out for when selecting a video surveillance solution
Heads may roll at BOC, says Palace if sugar smugglers are allowed to use recycled import permits
House energy committee chair Arroyo bats for cheap electricity
DOH reports increase in daily COVID-19 deaths, mostly unvaxxed
MOST READ
Metro Manila’s No. 1 wanted man arrested, says NCRPO
DepEd to give teachers P5K cash allowance within first week of classes
Jordan Clarkson arrives in Manila to bolster Gilas Pilipinas
Brian Poe-Llamanzares receives his PhD in Public Administration
Don't miss out on the latest news and information.