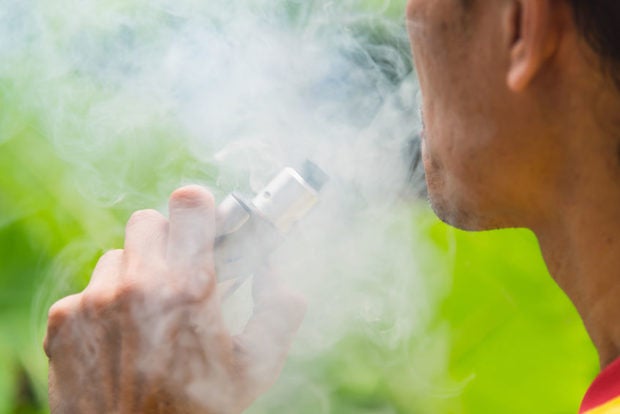 MANILA, Philippines — Doctors and health advocates on Thursday renewed their call for President Rodrigo Duterte to veto the vape bill, describing it as his “last act” for the Filipino people as he is set to step down from office by noon on June 30.

“[As] his legacy to the Filipino people, last act na pwede niyang gawin is [to] veto the vape bill as it goes against the protection of the health of the Filipino People,” Dra. Maricar Limpin, executive director of the Framework Convention on Tobacco Control Alliance-Philippines, said in a press conference.

(As his legacy to the Filipino people, the last act he can do is veto the vape bill as it goes against the protection of the health of the Filipino People.)

Limpin is also president of the Philippine College of Physicians.

(This vape bill really goes against the mandate of the FDA, wherein the mandate was given to the DTI.)

Dr. Ulysses Dorotheo, the Executive Director of Southeast Asia Tobacco Control Alliance (SETCA) and member of the Philippine Medical Association (PMA), also called for the veto of the vape bill.

(Because of this, together with the PMA and all the medical societies, we call on our president [Duterte] to veto the vape bill that is still pending in his office before he steps down as the president for the sake of the health of the Filipinos.)

According to Dra. Rizalina Gonzales, the Chairperson of the Philippine Pediatric Society Tobacco Control Advocacy Group, children are foremostly affected if the vape bill is enacted into law.

(Hopefully with the incoming new administration, the pending vape bill will be vetoed because the youth will be greatly affected.)

In April, the Department of Health (DOH) urged Duterte to veto the vape bill asserting that it puts the Filipino youth at risk.

Senator Pia Cayetano, on the other hand, said the vape bill is “masquerading” as a health bill.

Cayetano was among two senators who voted against the vape bill in the Senate.