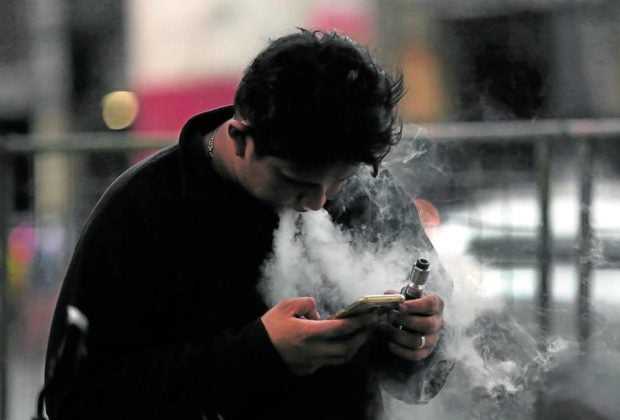 In a letter dated Dec. 17, the doctors said the measure was in effect a deregulation of “vape” products which contained the same harmful and addictive substance used in tobacco products.

“Mr. President, your campaign promise was to fight substance abuse and addiction. Once passed, this bill will deregulate the nicotine industry and will go directly against your promise,” they said.

Since the Senate passed Senate Bill No. 2239, the medical groups said the bill “will certainly pass the bicameral committee without further amendments.”

“We thus repeat our plea to you to veto [SB 2239] in its entirety, to give medical societies more time to present our case for true regulation,” they said.

The letter was signed so far by the presidents of 43 medical groups including the Philippine Medical Association, the main organization of all physicians in the country.

“When presidents of 50 medical societies get angry at the same time, there must be a good reason. Like the vape bill where 19 senators sold us to the tobacco industry,” said one of the signatories, Dr. Antonio Dans, president of Asia Pacific Center for Evidence Based Healthcare.

The doctors said the measure would undermine health regulation when it transfers regulatory authority from the Food and Drug Administration (FDA) to the Department of Trade and Industry (DTI).

The proposed law also lowers the age limit for vaping from 21 to 18 years old.

“In truth, this bill is a deregulatory measure that was passed in haste to the surprise and dismay of the medical profession while we were preoccupied with the COVID-19 pandemic,” the doctors said.

They also disputed the claim by proponents that vaporized nicotine products are alternatives to tobacco because they had less toxins.

“This concept, propagated by the tobacco industry, is misleading because it only potentially applies to smokers. When nonsmokers (80 percent of the population) use these products, instead of ‘harm reduction’ you get: a two-fold increase in future tobacco use, a four-fold increase in excessive alcohol intake, and a five-fold increase in marijuana use and potentially other illicit drugs,” they said.

In February 2020, Mr. Duterte issued Executive Order No. 106, ordering a ban on the manufacture, distribution, marketing and sale of unregistered e-cigarette products and its use in public places.

That directive came three months after Mr. Duterte ordered a ban on e-cigarettes which authorities implemented days later, amid criticisms that the ban had no legal basis.

EO 106 did not ban e-cigarettes per se, but prohibited the manufacture and sale of unregistered heated tobacco products and electronic cigarettes or vapes, as Finance Secretary Carlos Dominguez III explained following the release of the order.

“Thus, the manufacture, sale, and importation thereof shall still be allowed subject to registration with the [FDA],” Dominguez said.

The order also expanded the nationwide ban on cigarette smoking in enclosed public places and public conveyances to include vapes.

Under EO 106, all e-liquids, solutions, refills, and other similar components of electronic nicotine/nonnicotine delivery systems and heated tobacco products (ENDS/ENNDS and HTPs) should be registered with the FDA.

All devices forming components of ENDS/ENNDS and HTPs will be subjected to standards imposed by the DTI and the FDA, while other novel tobacco products will be similarly regulated by the Inter-Agency Committee-Tobacco.

Manufacturers, distributors, and sellers of these products were also required to secure a license to operate from the FDA.

—WITH A REPORT FROM ANA ROA,