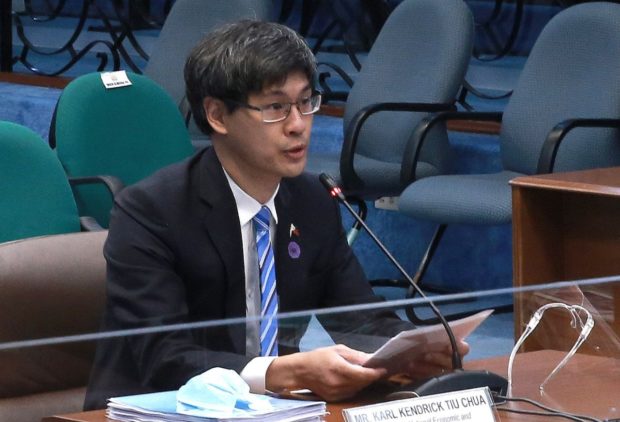 NEDA CHIEF FACES CA: National Economic and Development Authority (NEDA) acting Sec. Karl Kendrick Tiu Chua appears before the hybrid meeting of the Committee on Tourism and Economic Development of the Commission on Appointments for the deliberation of his nomination as NEDA secretary, Wednesday, June 02, 2021. (Alex Nueva España/Senate PRIB)

MANILA, Philippines — Socioeconomic Planning Secretary Karl Kendrick Chua on Sunday said extending immediate aid to areas badly hit by Typhoon Odette (international name: Rai) last week would be key to preventing a temporary slide to poverty of the storm’s victims and the aggravation of the economic scarring wrought by the prolonged COVID-19 pandemic.

“Immediate relief operations are the priority now to mitigate the effects (of the typhoon) on affected people,” Chua, who heads state planning agency National Economic and Development Authority (Neda), told the Inquirer.

The National Capital Region had the lowest poverty incidence at 7.8 percent of its population. The nationwide poverty rate climbed to 23.7 percent, equivalent to 26.1 million Filipinos, during the first half of 2021, from 21.1 percent or 22.3 million poor people in the same period in 2018.

Last Thursday, Finance Secretary Carlos Dominguez III said the government could tap the $500-million quick-disbursing credit line for disaster response and reconstruction, which the World Bank extended to the Philippines in November, to address the extensive damage inflicted by Odette on people and property.

A similar $500-million CAT-DDO 2 loan granted by the World Bank in 2015 released $496.25 million to the government in 2018 to rehabilitate the areas flattened by Typhoon “Ompong” (Mangkhut) in Luzon three years ago.

Asked about the potential impact of Odette’s damage on fourth-quarter gross domestic product, Chua said Neda was still awaiting a full impact or damage report. If needed, the government will do a post-disaster needs assessment, he added.