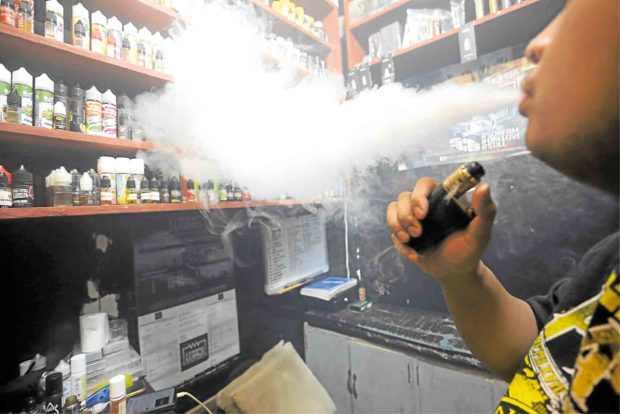 RESTRICTED USE A customer checks out vape flavors at a store in Pasay City, which has banned vaping in public areas. JOAN BONDOC/PHILIPPINE DAILY INQUIRER FILE PHOTO

MANILA, Philippines — Members of the Filipino medical community are ready to question the constitutionality of the vape bill before the Supreme Court if it passes into law.

“We were already talking among ourselves—although I do not want to see this happen—na in the event that this bill passes as a law, we will definitely question the constitutionality and DTI (Department of Trade and Industry) acting as the regulatory body on a health product,” Dr. Maricar Limpin, president of the Philippine College of Physicians, said in a press conference on Thursday.

“We will be ready. The medical community will be one as far as this is concerned,” she added.

The press conference was also joined by other doctors and health advocates as well as Senator Pia Cayetano, who was among the two senators who voted against the vape bill in the upper chamber.

When it passed the Senate on final reading in December 2021, Cayetano said she was “beyond disappointed and saddened” that products covered by the bill will not have the “regulatory stamp” of the Food and Drug Administration (FDA).

As the Supreme Court ruled, DTI regulates under its expertise; however, the SEC regulates trade, and the FDA controls health, Cayetano said during Thursday’s press conference.

The vape bill has yet to be submitted to President Rodrigo Duterte for signature and is “sitting on a table in the House of Representatives,” according to Cayetano. If this remained unacted by the President, it would lapse into law.

“For me simple lang e. January pa ‘yan pumasa ‘di ba? So, give it to the President of the same Congress where it was passed, and if it’s sitting in some table, I don’t know why that’s the case,” the senator said.

“Allow the current president to do what he needs to do with it and, of course, ang panalangin namin is ma-veto (praying it will be vetoed),” she added.

The bill’s final version was ratified by both houses of Congress last January.

Under the said version, the bill gives manufacturers, distributors, importers, and sellers an 18-month transitory period from the issuance of the implementing rules and regulations to comply with the requirements of the measure, including the registration of the products with the DTI.

The bill also tasks the Department of Health to prescribe guidelines on the implementation of smoking and vaping restriction awareness campaigns.

DTI must consult with FDA when setting technical safety, consistency, and quality standards for products, according to the measure.

US to propose rule to limit nicotine levels in cigarettes