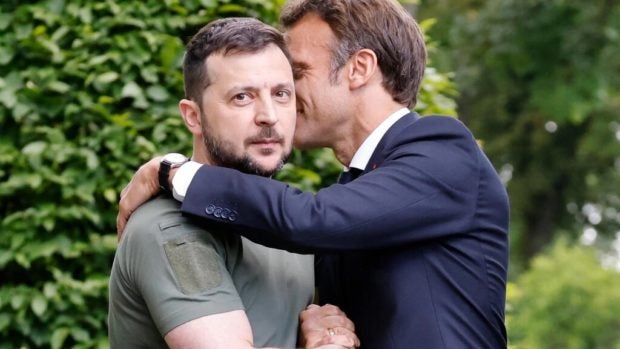 PARIS — An awkward-looking exchange between French President Emmanuel Macron and Ukrainian counterpart Volodymyr Zelensky that was captured on camera in Kyiv drew commentary and mockery online on Friday, with some seeing deep meaning behind the body language.

The image, taken by Agence France-Presse (AFP) photographer Ludovic Marin, appeared on newspaper front pages and quickly became a meme on social media in Ukraine and beyond.

It was taken at the end of a joint news conference on Thursday where Zelenskyy appeared alongside Macron, German Chancellor Olaf Scholz, Italian Premier Mario Draghi, and Romanian President Klaus Iohannis.

Although it appears as if Macron is hugging a frosty Zelenskyy, who is not reciprocating, Marin said the notoriously tactile French leader was instead saying something into his Ukrainian counterpart’s ear.

“Why is Zelensky looking at us? I don’t know,” said Marin, who has been AFP’s chief photographer covering Macron for five years. “It’s true that there’s a difference in the way they look which is very striking.”

“Obviously everyone was trying to interpret the warmth between them after the exchanges that have taken place.”

Just before this photo, Macron and Zelensky had shaken hands — in the manner of an arm wrestle.

They hugged when they first met at the Ukrainian presidency earlier in the day.

Jokers on social media were quick to suggest captions for the image given past tensions between Macron and Zelenskyy over the French leader’s repeated phone conversations with Russian leader Vladimir Putin.

“So much love and only six Howitzers,” wrote Yevhen Buderatsky on Facebook, referring to Macron’s pledge in Kyiv to deliver six more Caesar artillery pieces to Ukraine’s besieged forces.

It’s not the first time Macron’s manner with other leaders has aroused curiosity, with him repeatedly engaging in handshake battles with former US President Donald Trump intended to show he would not be intimidated.