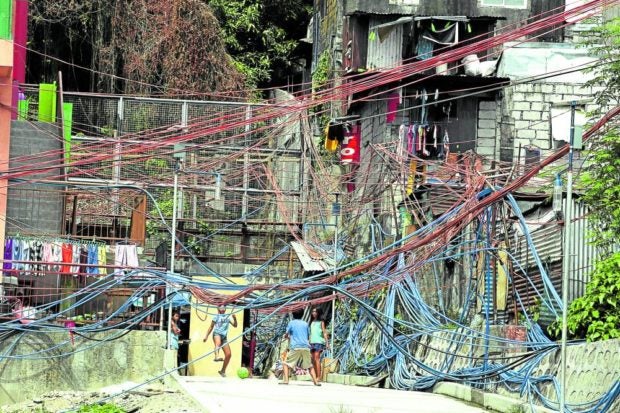 POWER TRIP | Children play despite the tangled electric wires along a road in Katipunan. Two power plants in Bataan tripped, cutting them off from the Luzon grid. —FILE PHOTO

MANILA, Philippines – The country’s grid operator, National Grid Corp. of the Philippines (NGCP), raised a red alert in Luzon on Saturday due to insufficient power supply, which briefly affected electricity services to over 1 million customers in Metro Manila and adjacent provinces, the Department of Energy (DOE) said.

NGCP lifted the red alert at 5:30 p.m., shifting to yellow alert, which lasted until 11 p.m. on Saturday.

Red alert is raised when the power supply is insufficient, which may lead to outages. On the other hand, a yellow alert means it may or may not lead to rotational brownouts.

Saturday’s red alert resulted in power interruptions in parts of the areas covered by Manila Electric Co. (Meralco) and other power distributors in Luzon.

Meralco reported an automatic load dropping (ALD) occurred at 1:53 p.m. on Saturday. ALD, as explained by the power distributor, means cutting off electricity at certain areas due to very low supply.

“This was due to the decrease of an approximate 1,200 MW (megawatts) in Meralco’s load affecting around 1.6 million customers in portions of Caloocan, Valenzuela, Malabon, Manila, Makati, Muntinlupa, Las Piñas and Navotas in Metro Manila; as well as parts of Bulacan, Rizal, Laguna, Batangas and Cavite,” it added.

The brief power interruption, according to the DOE, was due to the tripping of Hermosa-Limay 230kV Lines 1 and 2, disconnecting two Bataan power plants from the Luzon grid.

The energy department instructed the NGCP to immediately resolve the transmission line issues, submit to them the list of affected customers that experienced power interruption and explain the details of the incident.

“The DOE has also initiated its coordination with the Energy Regulatory Commission in addressing this matter,” it added.