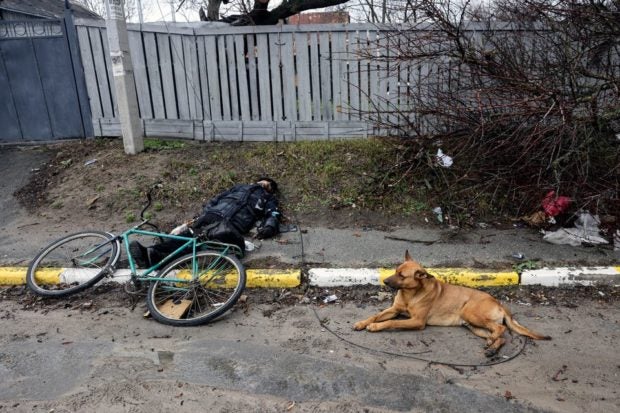 A dog lays next to the body of a civilian, who according to residents was killed by Russian soldiers, amid Russia’s invasion on Ukraine, in Bucha, in Kyiv region, Ukraine, April 3, 2022. REUTERS

The French interior and justice ministries said they had sent the team to “prevent the impunity of acts constituting war crimes” following the killings that shocked the world.

Russia immediately accused the team of bias and trying to tarnish Moscow’s reputation.

The French ministries said the detectives would “provide concrete support” to Ukrainian and international jurisdictions to probe the killings.

“In agreement with the Ukrainian authorities, it may also contribute to the International Criminal Court investigation.”

The experts will help in “identification and collection of evidence,” they said.

France’s ambassador to Ukraine posted a photograph on Twitter of the uniformed officers standing by a mobile laboratory van in the western city of Lviv.

“Proud to welcome to Lviv the detachment of technical and scientific gendarmes who came to assist their comrades in investigations of war crimes committed near Kyiv,” Etienne de Poncins said.

“France is the first to provide such help. They will start work tomorrow.”

Ukraine says it found 1,222 bodies in areas in the Kyiv region from where the Russian army recently retreated.

It has vowed to find and identify those behind civilian killings and has called for international help in doing so.

The ministries said the team is made up of “two forensic doctors and about 15 gendarmes from the National Gendarmerie Criminal Research Institute (IRCGN), experts in crime scene and victim identification”.

The officers are skilled in “DNA sampling and processing fingerprints” and will “set up a chain of examination and identification of bodies.”

They are equipped with a DNA lab that will allow them to do “rapid genetic analysis.”

Russia’s defence ministry said it could not “count on an impartial investigation” because the French experts were biased.

The aim of the mission was to “cover up numerous war crimes” committed by the Ukrainians and “fabricate accusations against the Russian forces”, it added.

Images of the dead civilians in towns such as Bucha and Irpin near Kyiv have shocked the world.

Ukrainian President Volodymyr Zelensky has said he has created a special mechanism to investigate Russian “crimes” in Ukraine, which includes “national and international experts”.

France’s President Emmanuel Macron has said there are “clear indications” of Russian war crimes near Kyiv.