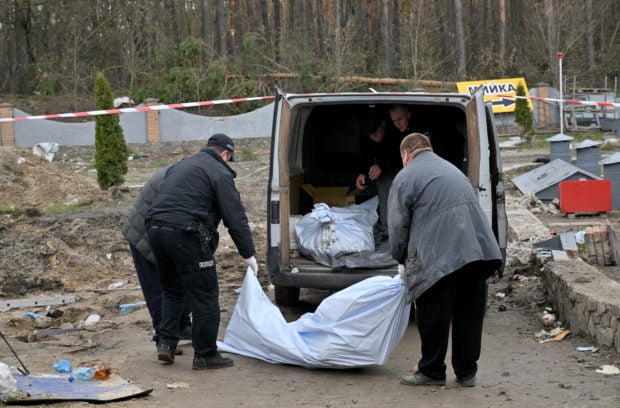 EDITORS NOTE: Graphic content / Ukrainian rescuers load the bodies which were discovered in a manhole at a petrol station in the outskirts of the Buzova village, west of Kyiv, on April 10, 2022. AFP

Ukrainian forces say they are preparing for a “last battle” for the besieged southern city of Mariupol because their ammunition is running out.

“It’s death for some of us, and captivity for the rest,” the 36th marine brigade of the Ukrainian armed forces says on Facebook, saying it had been “pushed back” and “surrounded” by the Russian army.

Ukrainian President Volodymyr Zelensky says he believes “tens of thousands” of people in the city have been killed.

Austrian Chancellor Karl Nehammer says he is “rather pessimistic” about the prospects for diplomacy ending the Ukraine conflict after his meeting with Russian President Vladimir Putin.

Describing Putin as having “massively entered into a logic of war”, Nehammer tells reporters “peace talks are always very time-intensive while military logic says: ‘Don’t spend too much time and go directly into battle'”.

The first European leader to meet Putin since the start of the Russian invasion, Nehammer says he “mentioned the serious war crimes… and stressed that all those responsible have to be brought to justice,” also telling Putin of the “urgent” need for humanitarian corridors.

French police officers and forensic doctors arrive in Ukraine to help investigate the discovery of scores of bodies in civilian clothing scattered in Bucha and other towns around Kyiv after Russia’s withdrawal from the region.

Ukraine says it has discovered 1,222 bodies in Bucha and other towns.

Despite the allegations of atrocities, Ukraine’s Foreign Minister Dmytro Kuleba says he is still open to negotiating with Moscow.

“If sitting down with the Russians will help me to prevent at least one massacre like in Bucha, or at least another attack like in Kramatorsk, I have to take that opportunity,” he tells US broadcaster NBC.

No EU consensus on sanctions

EU foreign ministers launch discussions on a sixth round of sanctions, but fail to find a consensus, including on sanctions on oil and gas, Josep Borrell, the bloc’s top diplomat, says.

Pointing to an anticipated massive Russian assault on the eastern Donbas region, he says the main focus now needs to be on providing more military aid to Kyiv.

US President Joe Biden and Indian Prime Minister Narendra Modi have a “candid exchange of views” on the Ukraine crisis at a virtual summit, a senior administration official says, but there is no indication of significant progress toward a unified stance.

French bank Societe Generale says it is ceasing its activities in Russia and selling its majority stake in Rosbank to an investment firm founded by an oligarch close to the Kremlin.

The war could almost halve world trade growth this year and drag down global GDP growth, according to the World Trade Organization.

France is expelling six Russians suspected of working as spies under diplomatic cover in Paris, after the French intelligence services uncovered a clandestine operation, the foreign ministry says.

Ninety percent of those who have left are women and children.