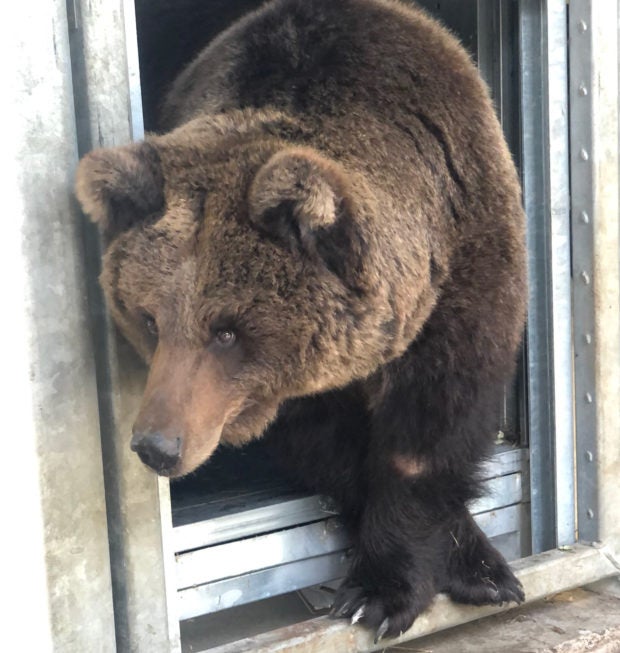 This handout photograph released by Stichting Bears in Mind on April 11, 2022, shows brown bear ‘Kiryusha’ at Ouwehands Zoo near Rhenen, The Netherlands on April 10, 2022. AFP

THE HAGUE—Kiryusha, a 24-year-old brown bear living in pitiful conditions for most of its life and then abandoned in war-torn Ukraine has begun a new life at a Dutch zoo.

“At the weekend, the Bears in Mind Foundation went to pick up a brown bear in Ukraine which had been living for 18 years in appalling conditions,” said the zoo in the central city of Rhenen.

“The bear’s situation had deteriorated so much during the conflict that the foundation did all it could to evacuate it from the war zone as quickly as possible,” the Ouwehands Dierenpark zoo said after it arrived on Sunday.

Kiryusha had spent years cooped up in a small cage at a hotel complex, according to the zoo. Typically, such creatures are made to perform tricks for crowds but several reports of maltreatment have emerged.

According to the zoo, she spent her first six years performing at a circus before being transferred to a hotel complex with a camp for children, where she lived in a cage with a concrete floor “with barely enough room to move.”

War had made Kiryusha’s situation untenable once the bear’s owner left to join the fighting.

Several other stories have emerged of animal charities bringing out abandoned animals including bears since the conflict began on February 24.

“Now with the war continuing, owners are no longer in a position to deal with the animal,” said Ingrid Vermeulen, director of Bears in Mind.

“Food is in short supply and we are finding that these kinds of animal are simply left to their own devices owing to the imminent threat of war,” Vermeulen added in the zoo statement.

In her new life in the Netherlands, after observing a period quarantine, Kiryusha will be able to roam alongside other rescued bears in a forest under supervision of the zoo and the foundation.

Other countries, including Belgium, Spain and Romania, have also received traumatised and under-nourished animals including big cats and tigers from Ukraine.