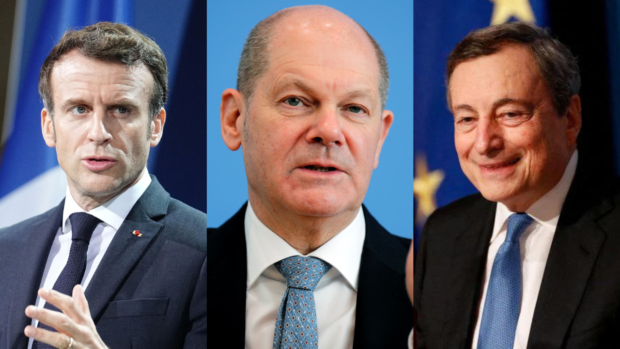 Macron, whose country holds the rotating EU presidency, had been particularly criticized for delaying his trip, which comes over two months after British Prime Minister Boris Johnson made the visit.

On March 15, the prime ministers of the central European countries of Poland, the Czech Republic and Slovenia are the first Western leaders to visit Ukraine, just three weeks after the Russian invasion.

They make the risky journey by train from Poland. During their talks with Ukrainian President Volodymyr Zelensky, Kyiv is under curfew and explosions can be heard from fighting on the western outskirts of the capital.

“It is here that freedom fights against the world of tyranny,” says Polish Prime Minister Mateusz Morawiecki, who calls for Ukraine to be given fast-track EU membership.

Britain’s Johnson is the first leader of a G7 country to visit on April 9, two weeks after Russian troops had been driven back from the suburbs of Kyiv.

Johnson is filmed on a walkabout in the deserted streets of Kyiv with Zelensky, acclaimed by residents for his show of solidarity.

Johnson arrives a day after European Commission president Ursula von der Leyen, who tells Zelensky that Ukraine “is marching towards a European future”.

On April 20, European Council president Charles Michel calls for justice for the war crimes committed in Ukraine during a visit to the war-scarred Kyiv suburb of Borodianka.

Both EU leaders visit Ukraine twice. Michel’s second trip on May 9 takes him to the blockaded Black Sea port of Odessa, where he has to break off a meeting and take shelter after missiles strike the city.

Russian missiles also fall on central Kyiv on the day UN Secretary General Antonio Guterres visits. Ten people are injured in the strikes. The UN team escapes harm but a spokesman for Guterres says he was “shocked”.

US President Joe Biden has yet to visit Ukraine but his wife Jill makes a surprise appearance on May 8 — Mother’s Day in the United States — meeting Ukraine’s first lady Olena Zelenska in a school close to Ukraine’s border with Slovakia that is now sheltering people displaced by the war.

On the same day, Canadian Prime Minister Justin Trudeau visits Kyiv where he says Russian President Vladimir Putin is “responsible for heinous war crimes” and must be held to account.