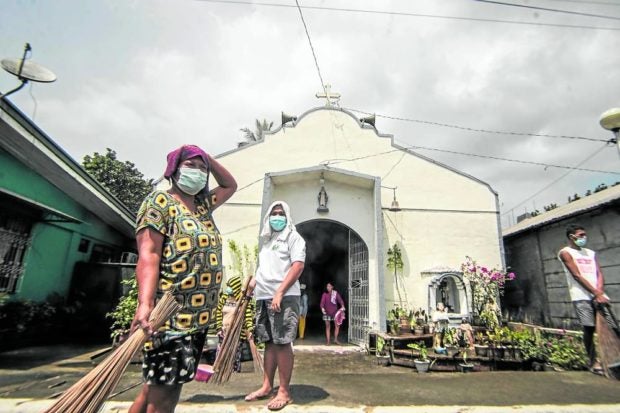 UNDER VOLCANO’S SHADOW | Residents of Juban, Sorsogon, start clearing a chapel compound of ash spewed by Mt. Bulusan on June 12. While evacuees have returned home, government volcanologists and disaster response teams are urging people to be alert and ready for another possible phreatic eruption at Bulusan. (Photo by MARK ALVIC ESPLANA)

LIGAO CITY, Albay, Philippines — Agricultural losses in Sorsogon province due to phreatic eruptions of Mount Bulusan on June 5 and June 12 reached at least P13.6 million, reports from the Department of Agriculture (DA) in the Bicol Region showed.

Mary Grace Rodriguez, chief of field operations division of DA Bicol, said the agency was expecting the figure to increase due to ongoing validation and assessment of the extent of the damage.

Among the crops damaged and destroyed by ashfall were rice, vegetables, abaca, amplaya (bitter gourd), squash, watermelon, pepper, corn, banana, and fisheries products in the towns of Juban, Casiguran, and Irosin.

On June 5, the volcano spewed steam-rich gray plumes that rose about a kilometer. Ashfall reached several villages in Juban and Irosin.

It was followed by another eruption a week later, where ash covered 24 of 25 villages in Juban town and other villages in Casiguran, Magallanes, Castilla and Pilar towns, and Sorsogon City.

The Philippine Institute of Volcanology and Seismology detected 10 volcanic earthquakes in the last 24 hours on Bulusan.

April Dominguiano, Bulusan resident volcanologist, said another eruption is possible. “If we consider all the monitoring parameters, [Bulusan] is still in abnormal condition,” she said in a chat message.