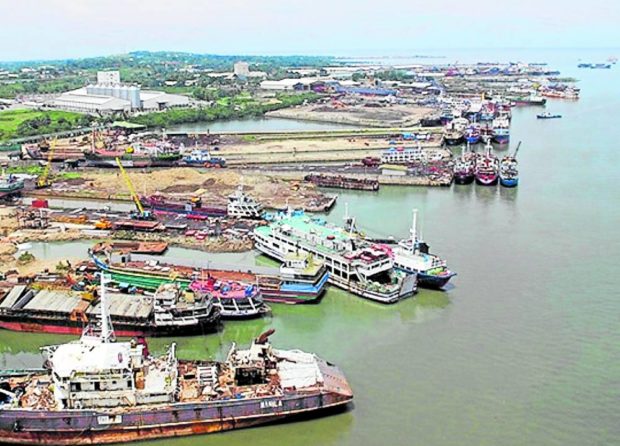 CEBU CITY, Cebu, Philippines — The mayor-elect of Consolacion town in Cebu province is pushing through with the local government’s 235.8-hectare reclamation project despite an order by President Rodrigo Duterte stopping similar applications due to reports of alleged corruption.

Vice Mayor Teresa Alegado on Tuesday said she believed that the town’s project was “exempted” from the directive since only new applications were stopped by the president in March.

“Our application dates back to March 22, 2019. I think we are exempted from the president’s order,” said Alegado, who will take over from her son, outgoing Mayor Joannes Alegado, as the town’s chief executive starting July.

The municipal government’s partner in the project ­ — La Consolacion Seafront Development Corp. — was incorporated in October 2019 with a capital investment of P10 million, based on records of the Securities and Exchange Commission.

During his visit to Cebu on March 31, Duterte announced that he stopped the processing of all applications for reclamation projects in the country, citing reports of corruption in these projects.

“All applications for reclamation, all — and it could include Cebu and Mindanao — I told the acting secretary to stop all of it,” he said, referring to acting Environment Secretary Jim Sampulna.

Lawyer Rose Liza Eisma Osorio, legal and policy director of Oceana Philippines, a nonprofit ocean conservation organization, said the group would verify the extent of the president’s statement with the Philippine Reclamation Authority.

In the meantime, she said Oceana would continue opposing the project due to its impact on the environment.

Oceana was among the 50 stakeholders from different government and private organizations who attended the 10-hour public hearing on Tuesday at the Consolacion municipal amphitheater.

The hearing was conducted by the Environment Management Bureau of the Department of Environment and Natural Resources to verify the accuracy of the Environmental Impact Assessment (EIA), a tool that will help the government, the proponent, and the affected communities assess whether the benefits of the reclamation project would outweigh the negative consequences or risks to the environment.

Consolacion officials said around 17 million cubic meters of backfilling materials, which would be taken “from other islands,” would be needed for the project.

Environmentalists, Osorio said, were anxious about the impact of the project which would not only destroy marine resources in the area, but also the mountains where rocks and soil that would be used as filling materials would be taken.

“Just imagine the impact of that project to the environment. The damage here is irreversible. Maybe for the short term, we can benefit from this project, but in the long term, we will lose the productivity of the marine resources,” she said.

During the public hearing, the Bureau of Fisheries and Aquatic Resources (BFAR) called the attention of the local government for lack of scientific studies that would back the project.

Rene Zaldy Porlaje, who represented the BFAR central office, said their office could not issue a “letter of no objection” because the EIA should be done scientifically.

“We cannot support this project if your study is not evidence-based. The EIA should identify and eliminate impact on the environment, people and governance,” he told the proponents.

“Apparently the EIA study has not yet been conducted properly. Convince us that this project has minimal impact on environment,” Porlaje added.

The BFAR office in Central Visayas earlier withdrew its “letter of no objection” on March 2 for application of area clearance, saying it had no authority to do so due to the scope of the project.