The President says people who have no money or only have ‘saliva’ for capital will just make reclamation projects end in corruption. Majority of the 187 reclamation projects across the country are still in the application stage.
By: Ador Vincent Mayol, Nestle Semilla - @inquirerdotnet
Philippine Daily Inquirer / 05:32 AM April 02, 2022 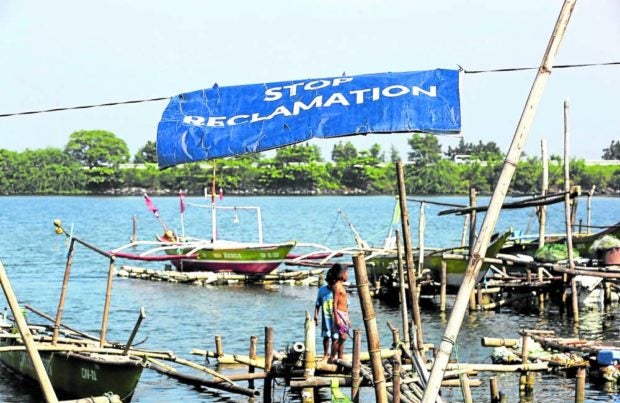 NO TO RECLAMATION A fishing community is opposing a reclamation project that threatens their livelihood in this photo taken on October 27, 2019 at Barangay Maliksi III in Bacoor City, Cavite province. INQUIRER/NIÑO JESUS ORBETA

CEBU CITY — President Rodrigo Duterte has ordered a stop to the processing of applications for reclamation projects in the country due to reports of corruption.

Speaking to top government officials from Central Visayas on Thursday night, he said he had fired several members of his Cabinet who were linked to corruption.

Duterte did not mention their names or say whether any of them had been dismissed due to controversies over reclamation projects.

“All applications for reclamation, all—and it could include Cebu and Mindanao—I told the acting secretary to stop all of it,” he said, referring to Acting Secretary Jim Sampulna who replaced Roy Cimatu last month as head of the Department of Environment and Natural Resources (DENR). “I’m not fond of announcing to the media [but] I’ve fired five or six Cabinet members because of corruption,” the President said.

He said he had warned his friends whom he had invited to serve and help his administration: “If you help me coupled with corruption, you know you have to go.”

On the government’s Freedom of Information website, the Philippine Reclamation Authority (PRA) listed 187 proposed reclamation projects across the country as of February this year. Majority of them are still in the application stage.

Fisherfolk and workers of various shipyards in Cebu province’s Consolacion town rejoiced over the President’s order.

“We are very happy with the development. I hope the good news continues even if there will be another president three months from now,” said Edward Ligas, an urban poor leader who represents the residents and workers affected by the reclamation project in Consolacion town.

Residents and workers wrote separate letters to the President, asking him to stop a 235.8-hectare reclamation project in the town’s Tayud village because they would lose their livelihood.

Environmental experts had warned that the Tayud reclamation project would damage marine biodiversity.

According to Dr. Filipina Sotto, the project leader of a study conducted by a Cebu-based think tank that focuses on environmental issues said the project would harm the poor the most, particularly the 500 fisherfolk from Consolacion and nearby localities.

The Securities and Exchange Commission records show that LCSDC was incorporated on Oct. 31, 2019, with a capitalization of P10 million. Its incorporators included Rep. Victor Yap of Tarlac and his brother, Jose Yap Jr., who is the former mayor of San Jose town in Tarlac.

Last month, the Bureau of Fisheries and Aquatic Resources (BFAR) in Central Visayas withdrew its “letter of no objection” to the application for area clearance for the project saying it had no authority to give permission for the reclamation.

Consolacion Mayor Joannes Alegado, who is pushing for the project, said the President’s statement “would not totally and permanently prohibit this kind of development.”

“Projects like these are essential in a progressive area and would be the solution to societal problems and concerns,” he told the Inquirer, citing traffic and congestion as just some of the problems that would be resolved.“As long as processes are being followed and requirements are complied with then there would be nothing wrong with it at all,” Alegado said.

Nerito Martinez, a private consultant on special projects to the municipal government, told the Inquirer that they couldn’t do anything about his order. But he added: “Anyway, he’s on the last days in office.”

Martinez said officials of Consolacion should talk with the PRA on what can be done to pursue the reclamation.

Duterte said he would not approve big-ticket projects, including the applications for reclamation, in his remaining months in office.

But he said “acceptable” reclamation proposals might be approved at the “last minute for as long as it’s honest and the legal requirements were complied with.”

The President said he will suspend reclamation projects in Manila or leave their fate to the next administration. He did not say whether he would allow the dumping of dolomite on Manila Bay’s controversial artificial white sand beach to continue.

Up to next admin

In February 2020, Duterte said he would ban private reclamation projects in Manila Bay but would allow those connected to government projects or those that had been given prior approval.

“The next administration, whoever gets to be president of this country—study carefully—because that Manila there, that is an old city and it will decay if you add so many things in front of Manila Bay,”  Duterte said at the inauguration of the Sangley Airport Project in Cavite City on Feb. 15, 2020.

In February 2019, Duterte issued Executive Order No. 74, delegating the power of the President to approve reclamation projects to the PRA Governing Board.

EO 74 repealed directives that placed the PRA under the DENR. It also removed the power of the National Economic and Development Authority (Neda) to approve reclamation projects.

Neda is now just one of three agencies, along with the DENR and the Department of Finance, whose “advisory opinions” will be sought to guide the PRA in evaluating and approving proposed projects.

The next president should ensure that the ecosystems—coral reefs and seagrass beds—that would be destroyed by reclamation are protected and made resilient to climate impacts, Guerrero said.

The Manila Bay Reclamation Project, which stretches from Navotas City to Cavite province, is currently ongoing.

Another is the 2,500-ha reclamation for the New Manila International Airport, “Aerocity,” in Bulacan, according to Leon Dulce, the national coordinator for Kalikasan People’s Network for the Environment.