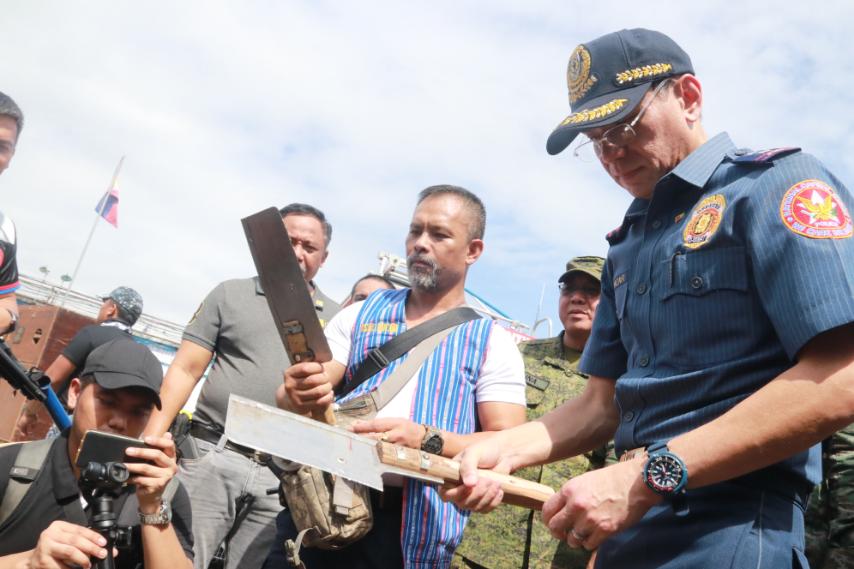 Kidnapping and serious illegal detention convict Jovito Palparan was interviewed by SMNI, a media company owned by President Rodrigo Duterte’s spiritual adviser, because the Bureau of Corrections (BuCor) allowed it.

In a message on Friday, Assistant Secretary Gabriel Chaclag, BuCor spokesperson, said the bureau had granted SMNI’s request to have Palparan, a retired Army major general found guilty in 2018 for the disappearance of two student activists and sentenced to a life term, as its resource person.

Chaclag said the interview request was made “even long before” but was granted only recently when COVID-19 restrictions were relaxed and Metro Manila was put under alert level 1. He said Palparan consented to the request, and it “went through the proper process.”

BuCor Director General Gerald Bantag sought to justify the grant of the interview, saying that although the felon was a “PDL,” or person deprived of liberty, “General Palparan has the right to express himself because there is no gag order for him … coming from the court.”

Justice Secretary Menardo Guevarra, until Thursday unaware of the interview, said Justice Undersecretary Deo Marco had required Bantag to submit a written report on the matter to the Department of Justice (DOJ) on Monday. Marco is the official assigned to oversee BuCor operations.

Palparan is staying in the minimum-security area of New Bilibid Prison (NBP) in Muntinlupa City, according to the National Union of People’s Lawyers (NUPL).

Members of the NUPL served as private prosecutors in the kidnapping case filed against Palparan and his co-accused by the families of University of the Philippines students Karen Empeño and Sherlyn Cadapan, who remain missing to this day.

The NUPL brought this matter to Bantag’s attention in a letter it sent on Friday, or two days after Palparan’s interview was aired by SMNI. A copy of the letter was sent to the Inquirer.

It said Palparan, like any other convict, should have been restricted to the maximum-security compound as stipulated in BuCor’s operating manual.

Only convicts “given light sentences or are about to be released and/or already considered ‘living out prisoners’” are supposed to be held in the minimum-security compound, the NUPL said.

It added: “The foregoing clearly shows that … Palparan is enjoying special privileges and preferential treatment even as he is already serving sentence for the crimes of which he was convicted.”

But Chaclag said the manual was “permissive,” and that Bantag had absolute authority over BuCor operations under Republic Act No. 10575, or the BuCor Act of 2013. He said the request for the interview was “aboveboard and properly studied by our legal department” before it was granted.

Chaclag also said BuCor “considered the importance of the issue [of the interview], which is the communist insurgency in the country.”

“We can see that the reformation program of BuCor … is effective, because our PDLs accept the court’s decision on their cases. They also don’t rebel against the government, and follow the proper process to attain justice,” Chaclag said.

In a report by SMNI, Bantag said Palparan was a good resource person because he was “an expert in his field of expertise … coming from his long military experience fighting the CPP-NPA (Communist Party of the Philippines-New People’s Army) insurgency.”

Under Section 5(d) of Part 4, Chapter 3 of the BuCor operating manual, the bureau may deny an interview request “if the inmate is accused or is otherwise involved in a pending criminal case.”

The consent of the concerned court is required to conduct an interview with someone with a pending criminal case.

Palparan is appealing his conviction at the Court of Appeals. He also has pending cases of two counts of kidnapping and serious illegal detention with serious physical injuries for his alleged involvement in the abduction of brothers Raymond and Reynaldo Manalo from their home in San Ildefonso, Bulacan, on Feb. 14, 2006.

NUPL president Edre Olalia said Bantag could not feign ignorance because Palparan’s trial was being held inside the NBP. Raymond Manalo was a key witness in the Cadapan-Empeño case. He said he and his brother were able to meet and talk with the two UP students in detention at Camp Tecson in San Miguel, Bulacan.

The brothers were able to escape from their detention in Pangasinan in 2007, after 18 months in the hands of military men. Olalia said SMNI’s request for an interview “should have been denied outright.” Besides, the civil and political rights of convicts are deemed “restricted” while they are serving their sentence, he said, adding that this was the same reason cited by the DOJ in opposing detained Sen. Leila de Lima’s petition to participate in Senate sessions by videoconference.

He pointed out that De Lima had not even been found guilty of the drug charges filed against her.

In a statement, De Lima called the interview of Palparan, conducted by Lorraine Badoy, spokesperson of the National Task Force to End Local Communist Armed Conflict (NTF-Elcac) and an SMNI anchor, “a bad April Fool’s Day joke that came days too early.”

During the interview, Palparan accused De Lima of having a hand in his conviction in 2018.

De Lima, who was justice secretary when the charges against Palparan were filed in court, said these were “all aboveboard and based on a solid case backed by clear evidence.”

According to the senator, Badoy is “desperate to fabricate what she sees as a fairy tale story” linking De Lima, presidential candidate and Vice President Leni Robredo, and the Liberal Party to the CPP-NPA.

De Lima said Badoy should have asked Palparan about President Duterte’s previous support to the local NPA command when he was mayor of Davao City.

“Badoy and the NTF-Elcac are moving mountains just to Red-tag or call communist sympathizers the human rights defenders, student activists, and progressive organizations in the country, Meanwhile, Mr. Duterte just announced going to China just to kiss the feet of Xi Jinping, the leader of the Communist Party of China,” De Lima said.

“Who is the real enemy of the Filipinos here: human rights defenders who protect our laborers and indigenous people, or China who wants to claim our territory?”